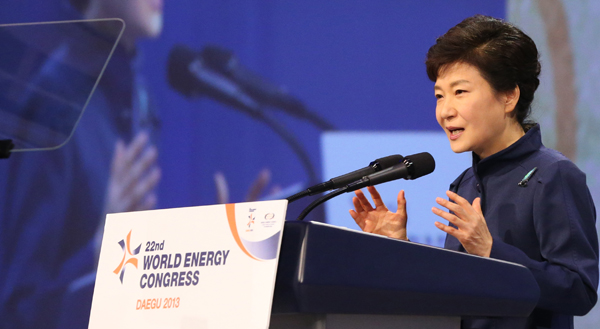 President Park Geun-hye told the World Energy Congress in Daegu yesterday that Korea will use the energy industry as a creative economy growth driver and share its experience with countries around the world.

“The energy industry is where the creative economy paradigm can shine in a true sense,” she said. “Korea will establish a system that makes it possible to reduce electricity consumption by mobilizing information and communication technologies, such as energy storage systems and energy management systems, and selling the saved volume from such technologies at an electricity market.”

The system will enable Korea to save up to 1 million kilowatts of electricity by 2017, creating an electricity market valued at 3.5 trillion won ($3.3 billion) and 15,000 new jobs.

She also vowed to participate in talks and deals among energy producing countries, consuming countries, energy-related industries and civil society for “clean, safe and available-to-everyone energy.”

To reinforce Korea’s commitment, Parks cited the nation’s hosting a series of energy-related international meetings, including the WEC, and the fifth Asian Ministerial Energy Roundtable, held in Seoul in September.

In her speech, Park brought up the three energy-related hardships facing the world today: energy security, equitable distribution and minimizing the impact on the environment. Global energy cooperation, a proper energy economics model, and energy policies and regulations could help the world cope with those issues, she said.

For global energy cooperation, she suggested that countries across the globe pave a way to jointly participate in shale gas, petroleum and gas development projects under way in North America, China and northern Siberia. To that end, setting up a unified legal and regulatory basis to build electricity and gas distribution networks is “very crucial.”

The WEC appearance was Park’s second visit to Daegu since her inauguration. The city is Park’s “political hometown,” where she was elected to the National Assembly four times. Her initial visit as president was on June 5 to attend the World Environment Day celebration at Daegu City Arboretum.

The 22nd WEC began Sunday at the EXCO in Daegu, the world’s 12th “solar city,” as designated by the International Energy Agency. The triennial event, known as the Energy Olympics, started in 1924.

More than 7,000 guests from 120 countries are participating this time, discussing various energy-related issues, sharing technology and looking for business opportunities. Korea is the third Asian country to host the event after Japan and India.