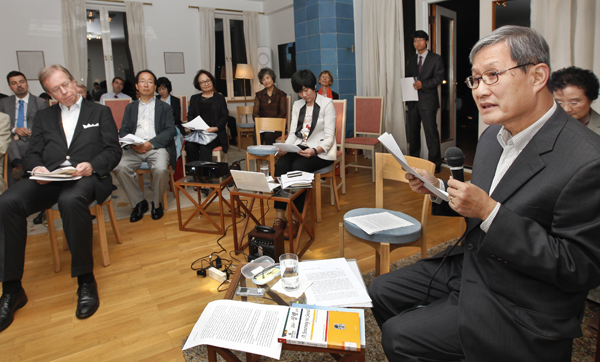 Kim Kwang-kyu recites his poem “Small Men” to members of the Seoul Literary Society on Oct. 1. By Park Sang-moon

The Seoul-based Embassy of Sweden hosted the 32nd gathering of the society in the residence of its ambassador, Lars Danielsson, on Oct. 1, where a string of famous Korean poets, novelists and artists have introduced their works to audiences, mostly expatriates, in Korea.

“This poem, ‘Small Men,’ was written in the 1970s, and Korea was under a huge pressure of power [due to the dictatorial leadership of Park Chung Hee] at the time,” Kim explained. “On top of that, people were more and more under the control of the developing capitalism, and more and more people were beginning to think of themselves as insignificant under the pressure of the power and the money.

“Also, even now, everything is changing so quickly, with the speed of light,” he said. “But we have only two legs and we can’t keep up. So we are beginning to think we are insignificant.”

Another of Kim’s poems that describes the reality of the 1970s is “The Land of the Mists.” It is about people living in mist who can’t see; who eventually get so accustomed to the mist that they do not try to see.

“In July, a BBC program dubbed ‘Poetry Please’ introduced one of my poems, titled ‘The Land of Mists,’ and recited the poem,” Kim said. “Of course, I didn’t listen to it. But the BBC paid me for the reciting, which moved me.”

After reciting a series of his poems, Kim read aloud “Statement of the Poet,” an essay about human alienation in a capitalist society.

“We are all linked to numbers the minute we are born,” he said. “With our first cries, we are given our birth dates, residential registration numbers...street addresses, ZIP codes, class numbers at school...Countless people are tapping away at their computer keyboards like slaves, bound to their yearly wages.

“However, I myself will never agree that accumulating capital is an end in itself, or that time should be quantified like money,” he said.

Danielsson said learning Korean literature is one of his favorite things about living in Korea.

“When I was in Sweden in December I was asked by a reporter what I thought was the best thing about being the Swedish ambassador in Seoul,” he said before the recital. “My answer was...what I like the best about Korea with being the Swedish ambassador is the unique possibility to learn more about the rich Korean culture. This is a treasure of Korean literature, which all of the world has not yet discovered.”