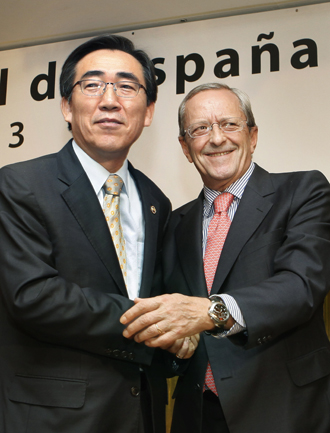 
Korea’s Embassy of Spain on Friday celebrated its Fiesta Nacional, or National Day, which commemorates the anniversary of Christopher Columbus landing in the New World more than 500 years ago, with hundreds of diplomats, officials and businessmen at the Lotte Hotel in central Seoul.

Spanish Ambassador Luis Arias Romero said that over the past five years “the mutual interest between Spain and Korea continued increasing significantly” with more than 250 Korean companies visiting Spain this year and exports to Korea increasing by 30 percent.

“Over the last 12 months, Spain has overcome the recession, showing increasing positive growth figures,” he added. “When celebrating our National Day, we are commemorating Oct. 12, 1492. It is the day when Europe knew America through Spain, and America knew Europe,” said Romero. “It is the day when we all realized that the world and reality is something built on a daily basis, if we choose to find new solutions to solve old problems.

“When we celebrate the National Day of Spain anywhere in the world, we are celebrating the historical ability of our country to move forward, regardless of the challenges we face as a nation and as a society.”

“Spain is currently one of our best friends and allies in Europe,” said Cho Tae-yul, second vice minister of foreign affairs, who spent three years as ambassador to Spain from 2008-11.

He pointed out that Korean Air flies to Spain three times a week and will be the destination of some 200,000 Korean tourists by the end of the year, compared to 10,000 a decade ago.

Regarding the Korean Cultural Center that opened in Madrid in 2011, Kim added, “I feel greatly honored to have personally contributed to its opening from the very initial stage.”