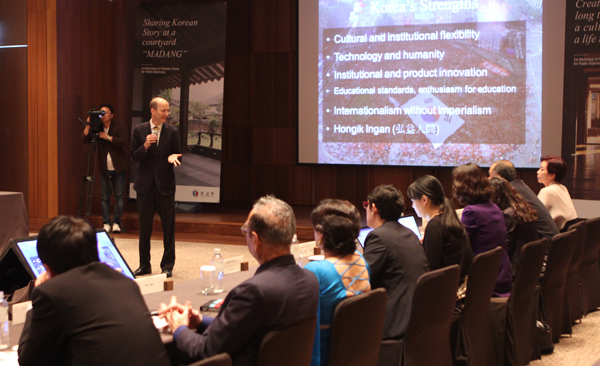 Diplomats, Korean officials and a group of scholars from some 16 countries pose at the inaugural workshop of the Scholars Group for Public Diplomacy on Thursday at Shilla Hotel in central Seoul. Provided by the Ministry of Foreign Affairs


The Korean government held its first Scholars Group for Public Diplomacy on Thursday at the Shilla Hotel in central Seoul, where foreign professors and diplomats from more than 16 countries discussed how to promote Korean culture and tradition abroad.

The Ministry of Foreign Affairs hosted the event, with the headlining theme “Creativity is a long tradition, a culture and a life to Korea.”

The scholars, who are residing in Korea, were appointed as honorary envoys for public diplomacy by the ministry. They teach at universities all over Korea and specialize in a wide range of subjects, including economics, computer engineering, biomedicine and politics.

The notion behind the appointments was to “seek advice and recommendations from foreign scholars residing in Korea on how our government should carry out public diplomacy in their respective countries,” Ma Young-sam, ambassador for public diplomacy, said at the event.

“Studying Korean traditional culture from a creation-based perspective will help us discover the inherent charms of Korea.”

During the workshop, award-winning scriptwriter Kim Hee-jae - who is a professor at Chugye University for the Arts and CEO of All that Story, a Korean culture promotion company - spoke on traditional cuisine, the creation of Hangul and the importance of creativity in Korean traditions.

Attendees also watched the popular 2011 drama “Deep Rooted Tree” and dined on traditional cuisine, including Korean pancakes, common in fall time, and steamed short ribs, a royal dish in the Joseon Dynasty (1392-1910). They also participated in an open-panel discussion, led by Han Choong-hee, director-general of cultural affairs at the Foreign Ministry, and shared suggestions on what measures Korea can take to increase its international appeal.

“I was drawn to Korea because there was a certain vitality and openness,” said Emanuel Pastreich, a professor of Kyung Hee University’s Humanitas College who lectured at the workshop.

He added that he was particularly impressed with the “seonbi,” or traditional scholars of Korea, who he described as intellectuals, “or someone who is educated and holds an understanding of the world.”

Pastreich said he admired the qualities of the seonbi, who believed “one should strive to serve society and a better world” and prescribed to their teachings by “pursuing self-expression, writing, as well as other creative and artistic pursuits.”

Pastreich said that there are “many remarkable aspects of Korea beyond the surface level” and that the next step is to explore its history and traditions.

He went on to say that he was impressed with the simplicity and communal nature of Korea’s hanok architecture, King Sejong the Great’s invention of Hangul, the Korean alphabet for the betterment of the common, as well as his numerous other scientific inventions, and the deep-rooted ethics coming from Confucian traditions.

He also pointed out that Korean democracy “is not something that happened in last 20 years” and existed since the era of the Three Kingdoms.

“What is remarkable about Korea is that Korea can create something out of nothing,” he said.

“Just look at the advertisements on TV - they have a great sense of humor - isn’t that creativity?”

The Scholars Group for Public Diplomacy was launched in January.