Dying to be pretty: TV under fire

Dying to be pretty: TV under fire 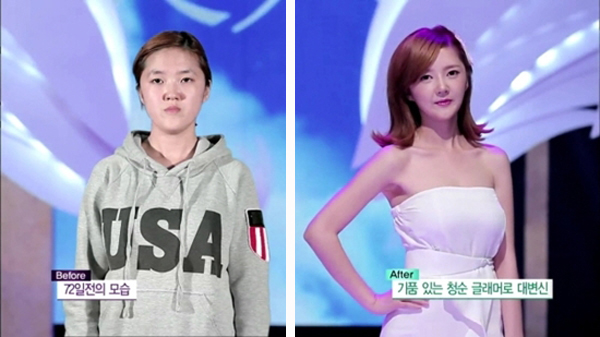 Kim Eun-ae was verbally abused by her husband because he thought she was ugly. But she was turned into a beauty through plastic surgery and a makeover for the StoryOn program “Let Me In” in July. [Screen capture]

In a society obsessed with appearance, obese and frumpy Shin Ye-rin was considered by most to be an alien. With her wild, bushy hair and 131-kilogram (287-pound) body, Shin usually locked herself in her small apartment, gorging on high-calorie foods like pizza and deep-fried chicken.

Her extreme appearance led to an invitation on the now-defunct TV show “Martian X-Files” early last year on cable channel tvN. It was a program that featured eccentric people, like a rail-thin woman who topped all of her food with whipped cream, even greasy grilled pork belly.

It was the goal of “Martian X-Files” to turn Shin, then 22 years old, into a “normal” person. They sent her to the gym and put her on a diet of salad, trying to reduce Shin’s body mass index from 48.2 to something below 30, the level considered obese by the World Health Organization.

But for Shin the gym was too tough, and she soon gave up on the boot camp-style training. So instead, the production team provided her with gastric bypass surgery.

Shin shed about 45 kilograms in a year thanks to the surgery. In the “Martian X-Files” follow-up that aired earlier this year she was slim enough to fit on the seat of a roller coaster and enjoy the ride. Now confident enough to leave her home, Shin also landed a job as a Chinese language instructor.

The show proudly showed off the new Shin - a makeover success story and a Martian no longer. She continued with her diet, dropping to 56 kilograms.

Shin was found dead in the bathroom of a motel in Dalseo District, western Daegu, on Sept. 22. According to Shin’s boyfriend, who was with her, she went into the bathroom to vomit but never came out. When her boyfriend barged into the room she was already dead. An autopsy is underway, but the police believe Shin died of an encephalopathy, or brain disorder, brought on by potassium deficiency - a condition associated with excessive vomiting or abusing diuretics.
“We just received notice from the National Forensic Service today that there were no toxic chemicals in her stomach on the day of her death,” said an official from the Daegu Seongseo Police Precinct’s investigation team six.

While Shin’s family and the obesity clinic exchange accusations for the young woman’s death, the police said the biggest issue would be her last visit to the clinic before her death. Earlier in September, she visited the clinic to further decrease the amount of food her stomach could hold.

“We have to find out more about her last medical procedure.”

“Martian X-Files” was scrapped in August, having apparently run out of stories. But there is no shortage of similar makeover programs all over cable, relentlessly condemning the ugly and fat, while associating thin and pretty with goodness and virtue. 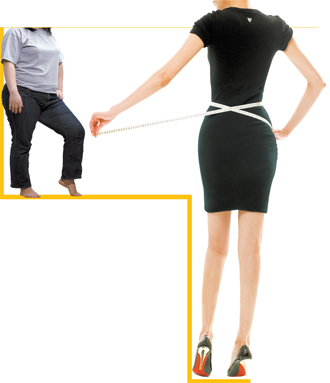 Go under the knife or live as a loser

The very first makeover show that landed in Korea was the Fox TV series “The Swan” in 2004. It was soon followed by many others, both foreign and domestic.

But none of them were as provocative as the StoryOn program “Let Me In,” a show where women competed to receive plastic surgery. Mi-in is the Korean word for a beautiful woman.

The first season of the show began airing in December 2011 with 300 applicants. Upon its airing, the show instantly came under fire for promoting excessive plastic surgeries, but StoryOn continued with the program and wrapped its successful third season last month with 4,300 applicants.

More than just simple makeovers, “Let Me In” chose two candidates for each episode, usually with serious deformities or heart-wrenching personal stories.

The two finalists would compete with each other for top-to-bottom and life-changing surgery. Some contestants even kneeled down in front of the show’s hosts, pleading for salvation.

For example, on one episode a 26-year-old woman named Kim Eun-ae said she was verbally and physically harassed by her husband because she is ugly. Her husband wanted a divorce and humiliated her by openly cheating on her with other women. But, in fact, Kim was just an ordinary woman with a chin that jutted out.

After Kim’s 60 million won ($52,713) surgery, the husband totally changed his tune, begging her to stay with him.

As each guest is turned into a beauty, detailed information about the plastic surgery she received on each body part and their prices are displayed on the screen.

By doing so, the 60-minute show draws a clear line between two different worlds: the beautiful and the ugly. The message was clear, that you could be a better person, have a better life and even win back a lost love if you went under the knife.

“It is a very developed form of 60-minute commercial,” said culture critic Hwang Jin-mi. “The show tries to make it look like it is saving the life of some pathetic people, but the truth is the show is deeply associated with a distorted medical industry.

With so much competition these days among plastic surgery clinics, what they need is advertising. “The show is a deal between the broadcasting station and the clinics,” she said.

The changing media environment is also contributing to the plethora of makeover shows.

“We have far more channels compared to the past,” said Hwang. “The channels need content to fill them. Since there are doctors who are willing to pay [for the participants’ plastic surgeries] to promote their clinics, there is no reason for broadcasters not to produce such shows.

“Then where does the money come from to produce such shows? It’s from ordinary people with slightly high cheekbones who don’t need surgery at all,” said Hwang.

The third season of “Let Me In” is over, but there’s a new one starting today to fill the void. “Reset: The Birth of Beauty” begins on TrendE, another cable channel.

“The nation’s diet survival shows label heavy people as intemperate and incompetent,” wrote Lim In-sook, a professor of sociology at Korea University who published a paper last year on those programs. “Such a perception is spread and accepted by viewers as the shows are presented as entertainment.”

Culture critic Kim Heon-sik goes even further, calling for the country’s media watchdog to think seriously about banning celebrities who have undergone excessive plastic surgery from appearing on TV, just like the media refuses to allow celebrities who have committed crimes to appear for a certain period of time.

“Having a lot of plastic celebrities in the media might give a wrong message to the public that anyone can harm their bodies for success,” said Kim. “In addition, the issue of obesity is not a matter for the individual, but for society and social status is also deeply involved.”

Makeover shows continue to pour forth, but they are all unregulated. When asked why, the Korea Communications Commission, the country’s broadcasting regulator, didn’t have much of a defense.

“We do keep an eye on them, but with around 60 or 70 people monitor the entire cable spectrum, there are simply too many cable channels,” said Jang Kyung-sik, the leader of the KCC team in charge of cable channels.

The KCC never issued a warning to “Martian X-Files,” but in July it did order “Let Me In” to stop promoting certain cosmetics directly.

Some countries, however, keep a strict watch on how beauty is presented in the media. Israel enacted a so-called “Photoshop Law” this year that requires advertisements to label photos of models that have been digitally modified. The law also requires models have a BMI greater than 18.5.

Spain is another country that prevents anorexic models from walking the runways and France debated a similar law in 2009. 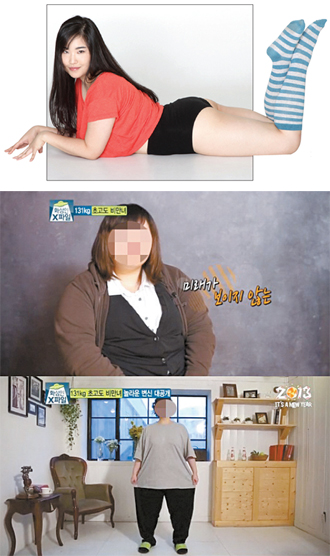 From top: Kim Gee-yang, one of Korea’s few plus-size models, was ranked 8th during the 2011 American Apparel Next Big Thing, an online competition for plus-size models. Provided by Kim Gee-yang: Shin Ye-rin was found dead last month in a motel bathroom, after undergoing an extreme diet plan and gastric bypass surgery for a cable channel program. [Screen capture]

Learn to love your belly

Cosmetic surgery has become a ubiquitous part of Korean society. According to the International Society of Aesthetic Plastic Surgery, Korea has the world’s highest per capita rate of plastic surgeries.

But a study conducted last year by the Samsung Economic Research Institute found that 95 percent of Korean women believe they are overweight, even though Korea had the lowest obesity rate in the OECD as of 2009, with only 3.5 percent of the population having a BMI over 30.

While most Koreans seem fixated on improving their faces and bodies, there are a few voices out there that say your love handles don’t make you a loser.

Korean Womenlink, a 26-year-old civic group that supports women’s rights, has promoted smaller campaigns about appearance and beauty standards in the past, but this year it made the issue a priority with a campaign titled “You are beautiful because you are different.”

“We have noticed women constantly feel forced to become beautiful and slim,” said Yeo Gyeong, the official in charge of the campaign. “Actually, a lot of them take risks to meet the standard of beauty set by the media.”

Starting in March, Korean Womenlink interviewed 20 ordinary women of different ages about their issues with body image, the results of which will be published as a book next month. When the book comes out, street campaigns and concerts will be held to promote the issue.

If the campaign of Korean Womenlink is a bit on the philosophical side, a project by photographer Ji Yeo, who is based in Seoul and New York, is more chilling.

Ji’s series “Beauty Recovery Room” looks at the faces and bodies of Korean women in the recovery room of plastic surgery clinics, fresh with stitches, scars and bruises. The stark images reveal the grim reality of plastic surgery, the side glossed over in advertisements and the makeover programs.

“Surgery dominated the conversations of my schoolmates, and many were planning to get some,” Ji wrote in an e-mail from New York. “But my dreams were much bigger. I was going to have a whole body surgery. I was going to totally transform my looks and become someone else. My incessant wishing became an obsession.”

She met 12 surgeons but found herself starting to think differently about cosmetic surgery. “The thought of losing various details about my look forever terrified me.”

That was the beginning of her project. She provided services for women undergoing plastic surgery, from driving to cooking to running errands, so she could photograph them moments after their operations.

Beauty Recovery Room has been featured in the international media by such outlets as Der Spiegel, The Daily Mail, and Marie Claire Brazil.

Through her one-person campaign, the 27-year-old model shows the realistic, curvy bodies of ordinary people, including herself.

“‘Innocent Pleasure’ is part of my campaign,” said Kim, who successfully debuted at Full Figured Fashion Week in Los Angeles in 2010 as the first Korean plus-size model.

“People feel guilty when they eat something good and delicious. That’s why I decided to call my dining an ‘innocent pleasure,’ because we don’t have to feel that way.”

“There is virtually no market for plus-size women in Korea. Some Internet shopping malls sell plus-size clothes, but they hire ordinary women,” Kim added.

Unable to earn enough from modeling, Kim also runs a lunch restaurant to make ends meet and earn enough for her overseas jobs.

But she wants to keep auditioning for plus-size fashion shows next year and prove her mantra: “We are all beautiful, regardless of sizes.”