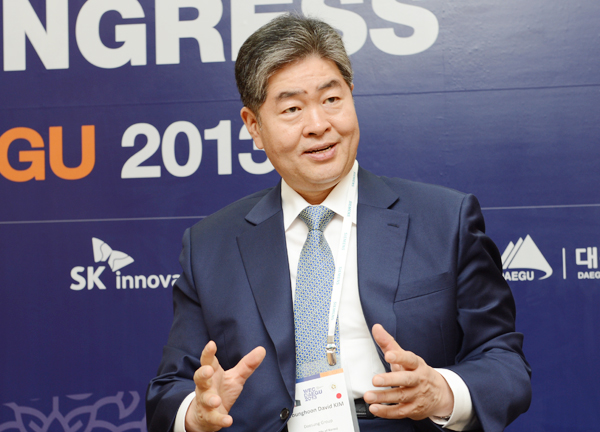 Congress organizers and participants may be able to take a rest after the closing session, but a busy schedule and important tasks await Daesung Group Chairman Younghoon David Kim, new cochair of the World Energy Council (WEC).

Kim, who previously was WEC vice chair for the Asia Pacific and South Asia region, will serve as cochair until 2016, at which time he will become chairman and lead the world’s largest energy organization for three more years.

A member of Energy Council of Korea, Kim emphasized that his goal as a leader of the WEC will be to offer a sustainable paradigm to stabilize the energy market. Kim said he wants to make the 90-year-old energy organization a “stabilizer, facilitator and coordinator” in the energy world.

Kim, 62, is the first Korean to lead the WEC, which represents more than 3,000 member organizations from government, industry and research in 93 countries.

The new cochair was one of the busiest men in Daegu, meeting with VIPs from around the world and attending sessions and press conferences throughout the five-day event. Kim looked happy and didn’t stop smiling, not only because the event was in his hometown of Daegu, but also because it provided an opportunity for Korea to step up as a key player in the world energy industry.

“To be honest, Korea was an outsider in the energy world, but since it hosted and digested the world’s largest energy event, the world is feeling the presence of Korea and looking at the country with a different view,” Kim told the Korea JoongAng Daily in an interview Tuesday. “As Korea’s status rises, we can be the oil-refining hub for Asia, which President Park Geun-hye mentioned, and play an important role in solving the problem of expensive oil and gas imports among Asian countries.”

In an era of energy transition, in which the world shifts its focus from fossil fuels to renewable energy, this year’s congress dealt with significant energy issues for the future. There were about 60 sessions and programs held at this year’s congress, but Kim said all of those programs are basically about the “energy trilemma” - how to secure global energy supplies, ensure social equity and energy access, and minimize the impact on the environment.

“Most people will think that participants here talked about how the world can overcome the trilemma, but actually people here were trying to found out how to balance those issues,” he said.

As the third son of late Daesung Group founder Kim Soo-keun, maybe it was inevitable for Kim to pay attention to energy issues. Daesung Group, founded in Daegu in 1947, started its business by selling charcoal briquettes, oil, coal and gas. Under Kim’s command, the company moved on to developing renewable sources of energy like landfill gas-to-energy, a combined cycle gas power station and Korea’s first system of solar power towers.

“I noticed that answers for local energy issues should be found at the international level, but I also found that we [Korea] don’t have solid international network,” Kim said. “In addition, there were cases of false and biased information flowing around in the energy market used for speculative buying and selfish interests, so I thought there had to be someone to provide correct information as well as making a platform to connect both sides of parties to communicate, which turned out to be the WEC.”

According to Kim, the WEC’s biggest advantage is its policy neutral and financial independence. With this characteristic and openness to everyone, the information and data coming out of the organization is objective and this is why everyone in the energy world pays attention to the WEC, Kim said.

As the cochair and future chair, Kim promised he will focus on the WEC providing accurate and timely information, and setting a platform to share information to make the energy market more sustainable.

“No energy group in the world is like the WEC,” Kim said. “If such a group is standing in the middle, having neutrality in policy and economic independence, it can move from ‘middle’ to ‘center’ to play a pivotal role.”

Kim said the he wants to be referred to as “chief stabilizer,” “chief facilitator” or “chief coordinator” when it comes to energy issues. The former chairman of Korea City Gas Association emphasized that he wants to upgrade the role of the WEC, which is to stabilize the market, mediate disputes between stakeholders and facilitate energy discussions and researches.

“If the WEC conducts only one those three roles, still it is doing unique and important work that no one else can do,” he said.

In addition to those roles, Kim said the key to serving as cochair will be to act as “chief communicator” and try to build trust among everyone. As chairman and CEO of Daesung Group, Kim knows he will have a lot of business opportunities, taking his company to international level, but he emphasized that he will not take advantage of his position at the WEC.

“In the WEC, no one advertises or promotes their own company,” Kim said. “That won’t be happening because it’s not good for the WEC or our company. My role at Daesung is to just remain in the center and let employees do their work properly.”