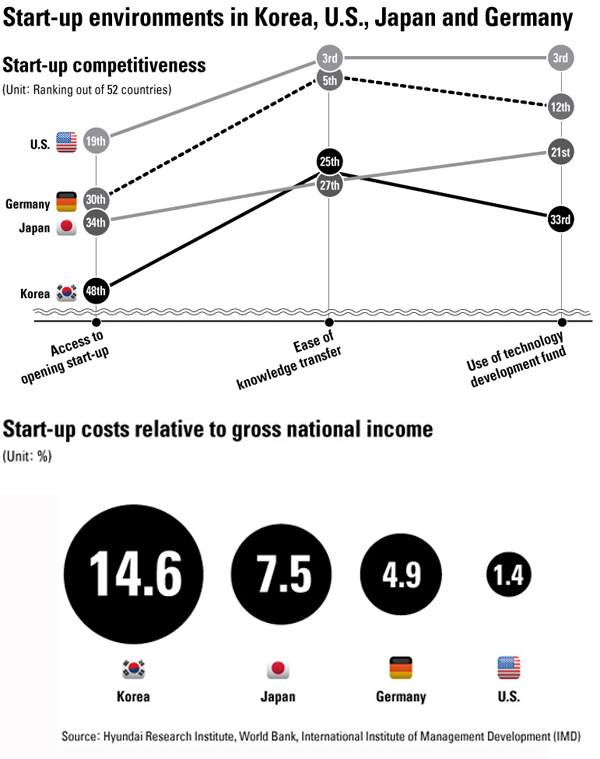 While people often leave suicide notes when their businesses fail in Korea, in the United States, business leaders often share their experiences of failure. It is a difference that reflects the differences between the two nations’ start-up environments. The JoongAng Ilbo consulted creative economy experts on how to build a culture that transforms failure into social capital.


“I have thought about committing suicide several times. I decided I would live just 15 more days.”

There is a wall for stories of failure at a training center of a youth start-up academy in Ansan, Gyeonggi, that is plastered with comments. The fear of failure in Korea is the second-highest among 31 Organization for Economic Cooperation and Development (OECD) countries.

“I visited my father’s grave after thinking about committing suicide,” and “I called the names of my family before I was about to jump into the river.”

“Even successful start-up entrepreneurs have suffered difficult failures,” said Park Cheol-gyu, chairman of the Small and Medium Business Corporation. “However, our society still tends to regard those who fail in start-up businesses as losers.”

Almost all start-ups are a series of trial and error, success and failure. In the United States, where start-ups are more active than they are in Korea, the accumulated experiences of those who fail are shared to benefit the entire business community.

In Korean society, along with the failure of a business, there is a stigma of being a credit delinquent, and such labels fade neither easily nor quickly.

People who fear failure are reluctant to start a business. According to an entrepreneurship report released by the OECD, 45 percent of Koreans said they feared failure if they tried to start their own business.

Kang Ji-hoon, the 40-year-old CEO of Kang and Park Medical, was once stigmatized as a credit delinquent.

Kang is the developer of X-Flex, a hands-free tablet stand with a flexible arm.

After quitting his regular job, Kang founded an air purifier company in 2005 that went under after two years. He used his savings to fund the business and his family had to live in a public sauna for a period of time.

It took almost four years for him to recover, making use of his materials engineering Ph.D.

“Start-ups have a higher possibility of failure than success, so it is important how you fail,” said Kang. “Although I failed at first, I gained experiences through failure that were useful when I undertook a new challenge.”

Failure paranoia is the inevitable result of an environment that actively discourages start-ups.

“There is a policy under which a student is expelled if he or she takes a few years off from school for a start-up business, and there are professors who scold students who establish start-ups on campus, saying it will get in the way of studying,” said Lee Doo-hee, head of an undergraduate start-up club at Seoul National University. “If universities keep discouraging students from start-ups, no student will jump into start-up businesses.”

FailCon, a failure conference held each October in San Francisco, is a forum for participants to discuss how their businesses failed, what they learned and how they recovered. FailCons also are held in Singapore, Japan and Australia.

“When we ask participants whether they have experiences of failure, more than half of them put their hands up and express their appreciation for an opportunity to share those failures,” said FailCon organizer Cass Philips in an interview with Entrepreneur magazine.

“Korean start-ups can be more active only when people whose businesses fail can recover and the experience becomes a foundation for future start-ups,” said Ko Young-ha, chairman of the Korea Business Angels Association.

People are especially afraid of failure because of the financial consequences. Experts identify the joint guarantee for a loan as the biggest problem.

“As the current system recalls all loans indiscriminately through joint liability guarantee, business failure has been equated with life failure,” said Nam Min-woo, chairman of the Korea Venture Business Association. “The funding method for start-ups should be switched from loans to investments.”

Expanding the mergers and acquisitions market and easing regulations on initial public offerings and stock options should be priorities, experts say.

They also emphasize that a market where ideas can be bought and sold should be established.

If a market focused on buying and selling intellectual properties without the physical products at hand can be established, it would help prevent start-ups from being driven into bankruptcy.

Under the current market, too many local start-ups can’t get through the “death valley” of negative early cash flow and close up shop even if they have an outstanding technology or idea because no one would invest in them without physical or visible evidence.