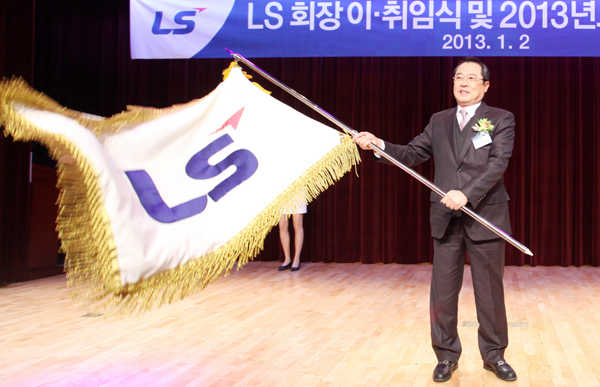 Chairman Koo Ja-yeol waves the flag of LS Group at his inauguration ceremony on Jan 2, 2013. Provided by the company

LS Group has been solidifying its business structure under the leadership of chairman Koo Ja-yeol, who took office this year. Since spinning off from the LG Group in 2003, LS Group has not strayed from its path of stable growth, even amid the global financial crisis. Pursuing responsibility and transparency in management, the group has grown into the 13th-largest business in Korea since the spinoff.

“Focusing on what we do best and at the same time developing new growth engines is our secret to overcoming challenges,” said LS Group official. Such a vision was well emphasized in the chairman’s inauguration speech earlier this year. Under the slogan “Unraveling the future together by taking on new challenges,” Koo emphasized four core business strategies for the year: improving management system to overcome low economic growth, finding sustainable new growth engines, expanding the global market and fulfilling corporate social responsibility.

Furthermore, Green, Solution and Partnership were chosen as the management direction, reflecting the fundamental shift that industrial paradigm is going through, such as rapid technological development and the rise of emerging economies as the main target market.

Under such company strategy, LS Group has not hesitated to take on challenges. It pushed M&A and aggressively entered the global market in the fields of industrial use electric power, materials and energy.

Innovation is sought not only at the group level but also at the subsidiary level.

Based on its success at developing extra-high voltage cable and superconducting cable, LS Cable & System has been constructing an electrical grid that can ensure energy conservation from the power production and transmission stages. LS Cable & System is also expanding overseas, with a main focus on Middle East. The region’s high demand for extra-high voltage cable is derived from frequent construction of new electrical grids and large-scale public works.

LSIS is also receiving large-scale overseas orders in transportation and distribution system of electric power, smart grid, green vehicles parts and new renewable energy. Its accomplishments were acknowledged when the subsidiary was chosen among the 100 innovative companies for three consecutive years by Thomson Reuters, a multinational media and information firm. Other subsidiaries such as LS-Nikko, LS Mtron and E1 are all pursuing active expansion into the global market.

All the innovative efforts for diversification and globalization at the group level have turned out to be quite effective, as sales, profits and brand value of LS Group each multiplied by four times, three times and seven times since the spinoff.

“LS Group will grow global competitiveness in core business areas with LSPartnership in mind, our philosophy that emphasizes ‘Greater Value Together.’” Said the company official.