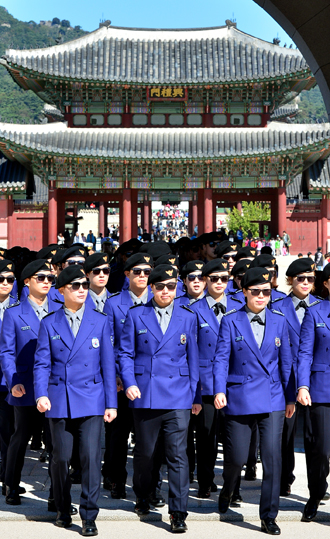 Korean tourist police officers march yesterday in Seoul during their inauguration ceremony near Gwanghwamun, the main gate of the 14th century Gyeongbok Palace, a well-known South Korean landmark. Korea unveiled its new tourist police force, who were selected for their proficiency in foreign languages, to protect overseas tourists during their stay in Seoul. The police officers will patrol areas such as Myeong-dong, Itaewon, Dongdaemun, Insa-dong, Hongdae, Cheonggye Stream and around Seoul City Hall. [NEWSIS]