Suspect in abductions is repatriated

Suspect in abductions is repatriated 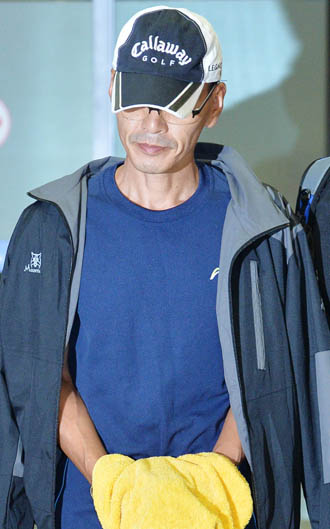 A 46-year-old Korean man accused of murder, abduction and theft in the Philippines was repatriated and transferred to the Busan Provincial Police Agency’s international crime investigations unit yesterday.

Choi Se-yong, who arrived at Incheon International Airport yesterday from Thailand, is accused of murdering and stealing more than 180 million won ($168,858) from a 26-year-old woman in Anyang, Gyeonggi, in 2007, after which he escaped to the Philippines.

There, Choi allegedly abducted some 10 Korean tourists up until 2011, stealing hundreds of millions of won from his victims. He is suspected of killing at least two of his victims.

Choi is also suspected to be the mastermind behind a Korean kidnapping ring in the Philippines that preyed upon Korean tourists and extorted money from their victims.

Korean authorities received a tip that Choi had headed to Thailand in January last year and collaborated with Thai authorities to track him down.

Choi was eventually arrested in Thailand last November and was sentenced to nine years and 10 months in prison by Thai courts in February for charges including forgery of a passport and other official documents.

The Korean Ministry of Justice requested Choi’s repatriation shortly after his arrest in Thailand. Thai authorities granted his temporary repatriation.

As soon as his trial and sentencing is completed here, he will be summoned back to Thailand so that he can complete his sentence there.

After he serves his sentence, he is expected to be returned to Korea, where he will serve out the ruling by Korean courts.