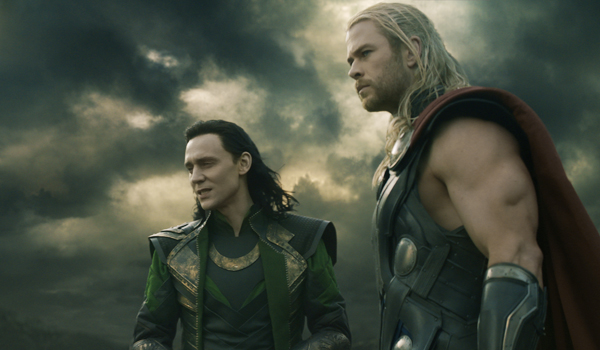 A scene from “Thor: The Dark World,” opening in Korea on Oct. 30. Provided by Marvel Studios

A little dose of sibling rivalry never hurt a film, and no one knows this better than Tom Hiddleston, better known for playing the bitter brother Loki to Thor in the titular Marvel Studios franchise.

“He suffers from very human things, from jealousy, ambition, pride and vanity … all his hatred comes from a very vulnerable place,” said Hiddleston, who added that he spent a lot of time trying to analyze a character that “wants to be Thor.”

But the dashing Brit will have you know that despite Loki’s evil countenance, he is charming, “and all the best guys in cinema are charming,” he said at a press conference on Monday to promote “Thor: The Dark World.”

The god of thunder himself, Chris Hemsworth, wasn’t able to attend, but President of Production at Marvel Studios Kevin Feige was on hand to support the evil brother who’s amassed as many fans as the hero of the movie.

The two also revealed that the title role could have gone to Hiddleston, who auditioned for Thor, but it was agreed that he made a better Loki.

“I think part of the joy of playing Loki is that he understands what it’s like being Thor in some way,” said Hiddleston, noting that it is still strange for him to look at a poster of himself portraying a Norse god.

Although he plays a bitter sibling, Hiddleston made it clear that he had no beef with his Australian co-star.

“Let me make it clear: Chris Hemsworth is the only Thor.

“As an actor, it’s probably the best partnership. We trust each other, and he makes me better,” Hiddleston said.

Together, they wrestled over the latest project.

“We wanted to create brothers who were opposites,” Hiddleston continued, likening Thor to granite and his character to the wind.

Although his character is essentially a villain, Hiddleston said that in the latest film, there was a chance to see a new side of Loki.

“I think what’s different in this film is, at the beginning, he is incarcerated and imprisoned for his crimes against humanity … In this film, he has the chance to turn it around,” said the star, being careful not to give away too much of the plot.

For Feige, the Marvel head said he may not be a film star, but he wanted to come to Korea, too, because “any place that has as many fans of Marvel as Korea does, I have to go once.”

“You have a country where 7 million out of 50 million [people went] to see ‘The Avengers.’ That just shows what a worldwide film market Korea is,” Feige said.

Hiddleston certainly showed he is up on Korean cinema.

“Park Chan-wook, Bong Joon-ho and Hong Sang-soo are some of my favorite filmmakers,” he said.

Furthermore, he is even aware that he has a special nickname in Korea: Hiddel-yi.

“I was told last night I had a special Korean nickname, which I think is the greatest thing to have happened to my life,” he said. “I never imagined that when I was studying acting that I’d come to Korea and that Korean fans would have a special nickname for me.”

“Thor: The Dark World” opens in Korea on Oct. 30. Earlier this year, the Marvel film “Iron Man 3” amassed more than 9 million admissions, making it the second-most popular foreign film ever here, after “Avatar.”