The myth of Euroskepticism

The myth of Euroskepticism 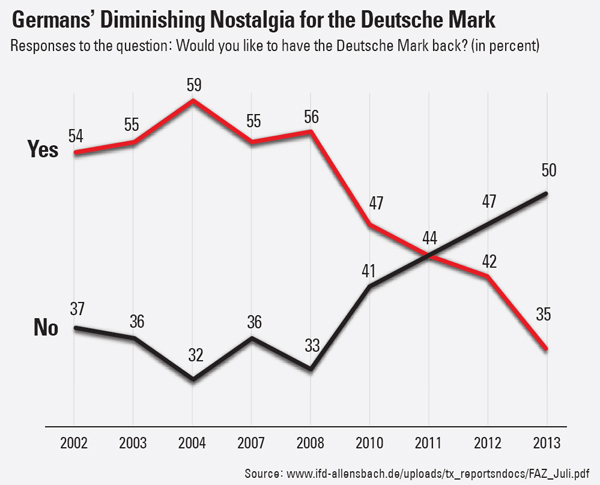 BRUSSELS - According to conventional wisdom, the euro zone crisis has reduced citizens’ trust in the European Union - and in European institutions in general - across all member states. Several recent reports have claimed that the German public, in particular, has turned its back on Europe.

For example, a recent briefing note by Open Europe claims that German citizens tend to trust the European Parliament less than their national parliament and detects a trend of declining German trust in EU institutions since the start of the crisis.

Similarly, a commentary by the European Council on Foreign Relations states: “Trust in the EU has plummeted across the continent. Both southern debtors and northern creditors feel like they are victims.”

And a Pew Research Center report released in May, entitled “The New Sick Man of Europe: The European Union,” concludes: “The European project now stands in disrepute across much of Europe.”

This narrative is simply wrong. In fact, Germans’ trust in the euro has been increasing throughout the crisis and, though their trust in EU institutions was falling until a couple of years ago, it has now recovered.

The best indicator of Germans’ attitude toward the euro is provided by a regular poll conducted since 2002 that asks a simple question: “Would you like to have the Deutsche Mark back?”

The graph below shows that in recent years the proportion of those who would like to have the DM back has steadily declined, and now stands at only about 35 percent.

By contrast, the proportion of those who would rather keep the euro has increased steadily throughout the crisis and is now around 50%.

It seems that crisis conditions have forced German citizens to reflect more carefully on the importance of the common currency.

In recent years, the German public has been extensively informed about the potential fiscal cost of the rescue operations for Greece and other countries.

But, despite the high potential cost, Germans have increasingly concluded that they prefer to keep the euro.

Even the Pew report found that a majority of Germans (52 percent) believe that “their government should provide financial assistance to other EU countries that have major financial problems.”

Moreover, Germany is not an outlier. On average, there has been only a modest EU-wide decline in trust in European institutions, and this has been driven largely by the pronounced decline of trust in four countries on the euro zone periphery: Spain, Greece, Portugal and Ireland.

More important, however, trust in EU institutions has actually been more resilient in these countries than trust in national institutions.

In Germany, trust in the key element of the EU, namely the euro, has been growing steadily.

This fundamental trend also helps to explain the outcome of Germany’s recent general election, in which Chancellor Angela Merkel campaigned on her record of “saving the euro” and won a resounding victory.

The only openly anti-euro party failed to clear the 5 percent threshold to enter the Bundestag.

There is much speculation about the composition of Merkel’s next government and what it will mean for Germany’s position toward Europe.

But the details of coalition politics in Germany matter much less for Europe than Germans’ broad support for the euro. Germany will not turn its back on the single currency - or on the European project in general.