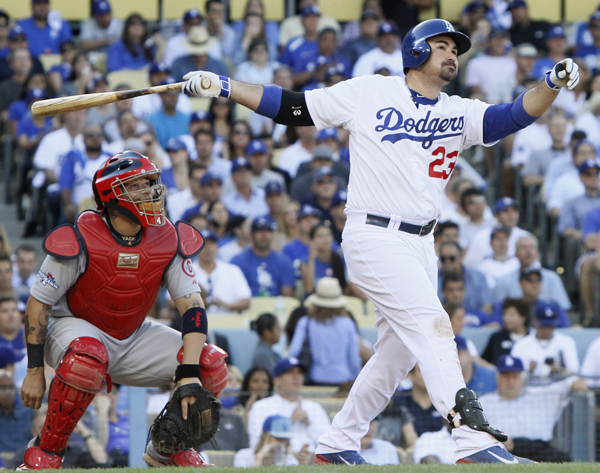 Adrian Gonzalez of the Los Angeles Dodgers watches his second home run in the eighth inning of Game 5 of the National League Championship Series against the St. Louis Cardinals, Wednesday. The Cardinals lead the best-of-seven series, 3-2. [AP/NEWSIS]

LOS ANGELES - Adrian Gonzalez homered twice to lead the Los Angeles Dodgers to a 6-4 victory over the Cardinals on Wednesday that trimmed St. Louis’ lead to 3-2 in the National League Championship Series.

Zack Greinke gave a stellar pitching performance while Carl Crawford and A. J. Ellis also hit home runs for the Dodgers, who rediscovered their power stroke just in time to save their season. They held in the ninth, when St. Louis scored twice off closer Kenley Jansen before he struck out pinch-hitter Adron Chambers with two on to end it.

The best-of-seven series shifts back to St. Louis for Game 6 on Friday night, when ace Clayton Kershaw is scheduled to start for the Dodgers against rookie Michael Wacha.

When those two squared off in Game 2, the Cardinals won, 1-0, on an unearned run.

Desperate to avoid elimination, the Dodgers brought in some Hollywood star power for pregame introductions. Will Ferrell announced their lineup and lent a comic spin to each player’s name, capping it by introducing Greinke as “today’s winning pitcher.”

Greinke got into a bases-loaded jam in the first inning but escaped with no damage. From there, he pitched seven strong innings and even delivered an RBI single.

The Dodgers rallied in this one after Greinke gave up an early 2-0 lead just as he did in Game 1, which Los Angeles lost, 3-2, in 13 innings on the road.

After neither team homered in the first three games for the first time in NLCS history, the big bats came alive. The Cardinals used a two-run homer by Matt Holliday and a solo shot from pinch-hitter Shane Robinson to win, 4-2, on Tuesday night.

This time, Gonzalez went 3 for 4 with two solo homers. His two-out shot in the eighth made it 6-2.

The Cardinals tied it at 2 in the third on Carlos Beltran’s RBI triple and Holliday’s run-scoring double.

Los Angeles answered in the bottom half. Mark Ellis singled leading off but was erased when Hanley Ramirez grounded into a double play.

Gonzalez followed with the Dodgers’ first homer of the NLCS, slugging the ball an estimated 428 feet into the right-field pavilion for a 3-2 lead.

As he headed toward the dugout, Gonzalez cupped his hands to his ears and wiggled them in a gesture resembling mouse ears. It was an apparent tweak at Cardinals pitcher Adam Wainwright, who said Gonzalez had done “some Mickey Mouse stuff” in celebrating a double on Monday.

The Dodgers are trying to become the 12th team to rally from a 3-1 deficit to win a best-of-seven series.

Greinke allowed two runs and six hits. He struck out four and walked one. AP