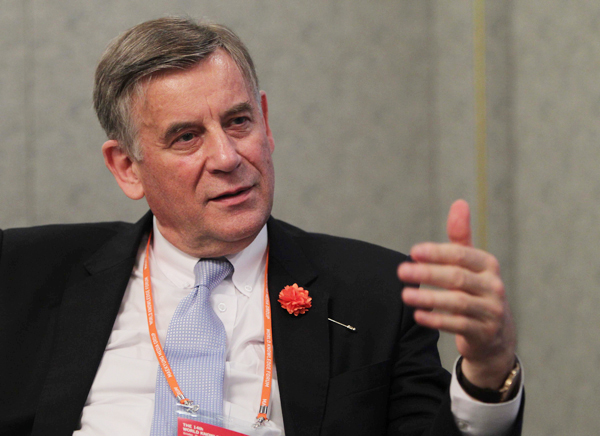 Hermann Simon, creator of the buzz phrase “hidden champions,” referring to small but strong businesses that lead the German economy, emphasizes that small businesses are much more important than large corporations when it comes to shielding an economy from risks.

In an interview with the Korea JoongAng Daily in Seoul on Wednesday, Simon said, “Small companies are needed to decentralize risks of an economy. The more concentrated an economy is on a few large corporations, the higher the risk.”

Simon was in town to lecture on hidden champions at the 14th World Knowledge Forum.

He used Nokia as an example. “Nokia accounted for 25 percent of Finnish exports, but with Nokia gone, Finland is in trouble,” he said. “Samsung is in the same position as Nokia was 10 years ago, so Korea can’t be excluded from a similar risk.”

Simon is a hidden champion himself, founder of a small but internationally influential consulting firm, Simon-Kucher & Partners, which will open a Seoul branch next year.

“Smaller companies, especially in the manufacturing industry, can both create jobs in the domestic market and contribute to increasing exports,” Simon said. “Germany’s per capita exports are $145,000 over a 10-year-period, while Korea’s are $77,000 and the United States $40,000. This is because Germany has powerful midsize companies.”

In a unique economic structure like Korea’s, in which 80 percent of GDP is dependent on chaebol, large companies tend to be somewhat arrogant. But they should learn from smaller companies, Simon said.

“Innovation effectiveness is much bigger at smaller companies. My impression, when it comes to innovation, is that large corporations throw big budgets to R&D problems, while smaller hidden champions devote dedicated teams of people to R&D,” he said. “Small teams of dedicated people lead to a better result. Small companies have five times more patents per employee than large corporations.”

In 2004, Nokia had 19,000 people in its R&D center, according to Simon. “But do you think such a huge organization can develop products that are actually close to consumers?” he asked.

He also took Samsung as an example. Simon received a little device playing music from a former Samsung executive in 2001. But the first market success was Apple’s iPod.

“Samsung had the invention but was not able to make it a market success,” he said. “What Apple did was to integrate its technology with consumer needs by making the handling very simple.

“The decisive driving force behind innovation of hidden champions is to balance technology with market needs.”

Simon offered a positive assessment of the Korean government’s approach to increasing the number of hidden champions to 300 by 2017.

“A deeper problem for Korea is the preference of young men to work at conglomerates rather than starting as entrepreneurs. It is a serious problem because their parents also want them to do so,” he said. “If that doesn’t change, you will not have enough start-ups.”

Rather than offering subsidies or lower tax rates, the Korean government needs to consider a vocational training school like the German government has, Simon suggested.

“I tell ministry officials not to do anything to help hidden champions, because they distract entrepreneurs from focusing on business,” he said. “The biggest contributor to success of hidden champions is the state-run vocational training system that allows German students to work for three days a week at small companies and study two days at schools.”