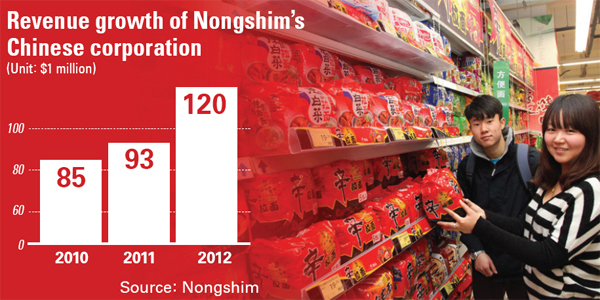 That translates to at least 1.8 billion packs of Shin Ramen sold, or more than enough to serve the entire Chinese population of 1.3 billion.

The noodle maker said yesterday the key to its success in China has been differentiation rather than localization, the strategy of most companies. While sticking to its original products, it reflected Chinese culture and sentiment in its marketing.

The Nongshim Shin Ramen World Championship of Baduk, founded in 1999, is an example of branding through China’s popular “game of go.”

Recently, it also teamed up with the world’s largest e-commerce company, Tao Bao, to tap into the Chinese online market.

It reported sales growth of more than 130 percent in the third quarter this year compared with the previous quarter.

The leading processed food maker has increased its sales target this year to $165 million. Sales were $120 million last year.

Considering recent growth in the ramen market of about 0.8 percent annually, Nongshim’s performance is exceptional.

“Nongshim, which has never posted negative growth in China for the past 15 years, is steadily maintaining its sales growth,” said Koo Myeong-seon, president of Nongshim China Corporation. “Recently, as premium products such as Shin Ramen Black and Doongji Cold Noodles gain popularity and positive results are coming out of the online market, further growth of Nongshim in the future is expected.”

The company has found its sales stride and will continue to lead the fast-growing online market as online food purchases on the Internet are emerging as a new consumption pattern in Asia, the president said.

The Tao Bao online market, which joined hands with Nongshim in April, has been settling quickly into the online market and drawing great attention from Chinese consumers.

“We are expecting even higher growth in the fourth quarter, considering Tao Bao’s Nongshim shopping mall has posted 130 percent sales growth in the third quarter compared with the previous quarter,” said Koo, the company’s president.

“This year, besides Tao Bao, we plan to sign contracts with other B2B online shopping malls to expand the business and make the most successful online business in the industry.”