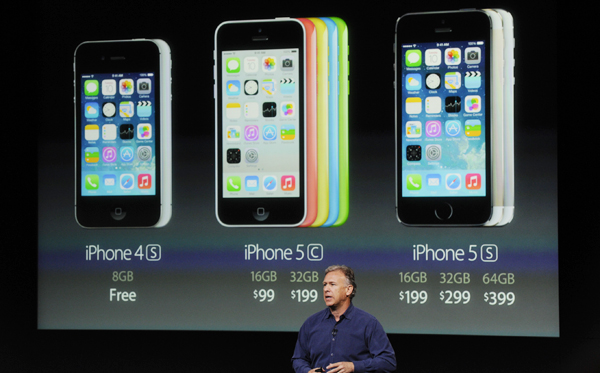 Apple co-founder Steve Jobs, who emphasized high-end consumer gadgets over cheaper ones, may have been right all along.

Last month, Chief Executive Officer Tim Cook introduced the colorful iPhone 5C, a less-expensive version of Apple’s smartphone, to “serve even more customers” around the world. It turns out people so far are more interested in its pricier, feature-rich cousin, the 5S.

Three surveys in the past two weeks said the company’s new high-end model is outselling the 5C by at least two to one. KGI Securities, a brokerage firm, slashed its quarterly estimates for 5C sales by a third, and retailers like Wal-Mart and Target have reduced the phone’s price. The Wall Street Journal reported Apple’s orders to suppliers for the iPhone 5C have been cut by a third.

Customers are shrugging off the iPhone 5C even as Apple spends heavily to advertise the handset, which is last year’s model repackaged in a colored plastic case. The 5C, which costs $100 less on contract than the iPhone 5S, is Apple’s attempt to lure buyers in developing markets like China, where Samsung Electronics and other Android phone makers lead. Even so, big sales of the pricier model are a boon because they carry fatter profit margins.

“Apple customers are still interested in premium products from a premium brand,” said Laurence Balter, an analyst at Oracle Investment Research in Fox Island, Washington. “If anything, the 5C is a failed experiment in trying to please the masses. Apple should stay focused on the premium and let Samsung take the lower end of the market.”

A survey released this week by Consumer Intelligence Research Partners found that 64 percent of U.S. iPhone customers were buying the iPhone 5S, which sports a better camera, faster processor chip and fingerprint-reading security features and starts at $199 with a carrier contract. While the company has let loose a barrage of television and other advertising, the iPhone 5C, which doesn’t have the same upgrades, was favored by 27 percent of buyers.

The early results give credence to concerns from investors and analysts that Cupertino, California-based Apple priced the iPhone 5C too high to appeal to more budget-conscious customers. The device is struggling with the perception that it’s lower-quality than the iPhone 5S, as well as its $550 price without a wireless contract, said Brian Blair, an analyst at Wedge Partners.

“In China, I’ve heard the joke that the C stands for cheap,” Blair said. “Investors have had concerns since the pricing was announced.”

Teresa Brewer, a spokeswoman for Apple, declined to comment.

Consumer Intelligence’s numbers, along with findings by Pacific Crest Securities and Canaccord Genuity, suggest that customers are viewing the 5C like they would older iPhone models. The first wave of customers typically flock to Apple’s latest device, rather than buying the cheaper version. That was the case on the first day of sales last month, when customers were disappointed to find retailers sold out of the expensive model with the newest features - yet with plenty of 5C handsets.

“To its detriment, it was targeting a certain subset of the consumer base,” said Josh Lowitz, co-founder of Chicago-based Consumer Intelligence.

Lackluster demand, including discounts to as little as $50 being offered by major retailers, led Ming-Chi Kuo, an analyst at KGI Securities, to lower his projection for fiscal fourth-quarter iPhone 5C sales to 11.4 million from 17 million. Apple gets about half its revenue from all models of the iPhone, and the device’s performance with customers affects the company’s financial results and stock price. The company is set to report fourth-quarter earnings Oct. 28.

Demand for the higher-end iPhone 5S appears to be making up for tepid 5C shipments. Apple said it sold a record 9 million iPhones upon the debut of the new models last month, and deliveries of some 5S handsets still take weeks. Apple also is slated to introduce new iPad models Oct. 22.

More sales of the iPhone 5S than the 5C also will bolster Apple’s profit margins, according to report by Michael Walkley, an analyst at Canaccord Genuity.

Jonathan Rosen, 34, was waiting in line for the 5S at Apple’s San Francisco store. The thinner and lighter design of the 5S outweighs any price difference, especially because he’ll be locked into a contract for two years, he said.

“Most people will err toward the one with the better feature set,” said Rosen, who works in marketing. “The price difference just isn’t substantial enough to want a 5C.”

Blair said Apple is ramping up production of the 5S, though that increase won’t be enough to make up for lower-than-expected 5C sales. He cut his total iPhone estimates for the quarter that ends in December to 53 million to 54 million, from 58 million.

The network of manufacturers that supply Apple with components for the iPhone 5C have been hurt as well. Career Technology MFG, TPK Holding and FLEXium Interconnect are among companies that have seen shares fall in recent days because of concerns about weak iPhone 5C demand.

The worries may be overblown because the ultimate success or failure of the iPhone 5C won’t be known for months, said Benedict Evans, an analyst at Enders Analysis in London. Apple’s most dedicated customers always rush out to buy the newest product, leading to a surge in sales. Purchases of the iPhone 5C will be more slow and steady, he said, because the handset is targeted at consumers who now own an Android phone or an older feature phone.

“By definition, the 5C would not sell well to customers who queue overnight on launch day - it ought to be more of a slow burn,” Evans said in an e-mail. “That means that it could be selling according to plan and still be outsold by the 5S this month. The question is what happens in six months’ time - does it fall off with the 5S or remain steady?” Bloomberg