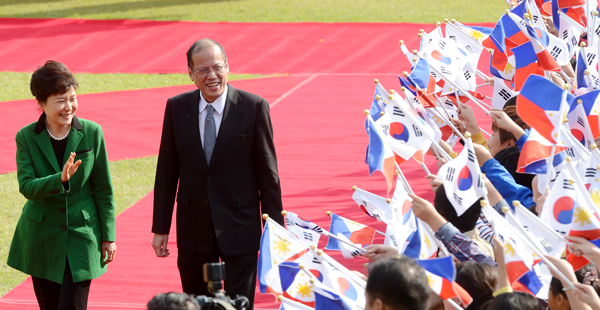 Philippine President Benigno Aquino III arrived in Seoul yesterday on a two-day state visit to discuss cooperation in trade, investment and defense with President Park Geun-hye. He is the first foreign president to visit since Park’s inauguration in February.

Park, in meeting with her Filipino counterpart, asked to expedite negotiations involving Korea’s export of 12 FA-50 fighter jets to the Philippines, estimated to cost $443 million.

In response, Aquino said it is “no secret” that the 120 fleets are insufficient for defending the Philippines’ lengthy coastline and that Korea’s military supplies and power are very useful for the Philippines.

They also discussed the project to build Multi-Industry Clusters in the Philippines. The clusters are supposed to involve the entire agricultural process from securing farmland to producing agricultural products, storage, processing and distribution. The agriculture ministers of the two countries signed a memorandum of understanding for the project in 2011.

“They now say the next big economic bloc following the BRICs [Brazil, Russia, India, China and South Africa] is VIP - Vietnam, Indonesia and the Philippines,” Park said. “It’s all indebted to your efforts.”

Aquino’s visit comes just a week after the two met at the Association of Southeast Asian Nations (Asean) meeting in Brunei. Aquino pushed through with his trip to Korea despite the 7.2-magnitude earthquake that devastated the central Philippines on Tuesday. He is scheduled to visit the War Memorial of Korea in central Seoul and meet with leaders of four major business lobbies in Korea today.

The Philippines is the first Southeast Asian country with which Korea forged diplomatic ties in 1949. About 1,000 Korean companies are currently in operation in the Philippines, and trade between the two countries reached $7.37 billion last year, an increase of 11 percent from a year earlier. Koreans make up the largest portion of tourists in the Philippines, more than one-fifth of foreign visitors last year.

Aquino’s visit comes just a week after the two met at the Asean meeting in Brunei.

Both politicians are also the children of former presidents in their respective nations.