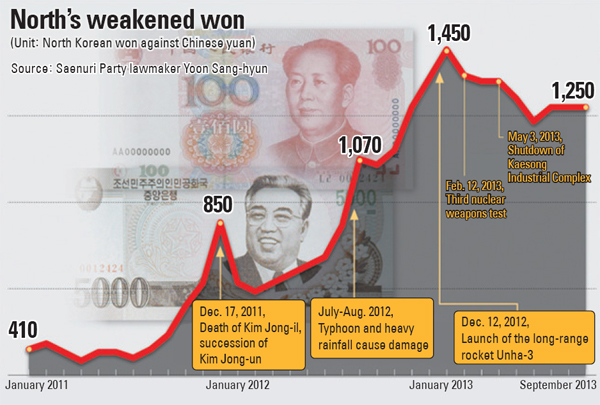 The value of the North Korean won has plummeted against the Chinese yuan in the last three years, hit by a continual series of crises, a South Korean ruling party lawmaker said.

Representative Yoon Sang-hyun of the Saenuri Party, a member of the National Assembly’s Foreign Affairs and Unification Committee, said at a parliamentary hearing Wednesday, “Through some sources in North Korea and from the government, we have analyzed the fluctuation of the North Korean currency for the last three years.

“The value of the Chinese yuan has surged in North Korean territory amidst a series of crises: military provocations, power succession and natural disasters,” Yoon said.

According to Yoon, the exchange rate of North Korean currency on the black market was around 400 won ($0.38) to the Chinese yuan between January and September 2011. But it rose to 560 won against the yuan in October 2011, 640 won in November and 850 won in December. That was a precarious time, Yoon says, with rumors that leader Kim Jong-il was sick. On Dec. 17, 2011, Kim died and was succeeded by his youngest son, Kim Jong-un.

In July and August 2012, when heavy rainfall battered North Korea, the won weakened more, reaching 1,000 won against the yuan. In December 2012, when North Korea successfully launched a long-range missile, its currency dipped to 1,350 won to the yuan from 1,250 won in November.

Ahead of its third underground nuclear weapons test on Feb. 12 of this year, the won fell close to 1,450 won against the yuan, the lowest level ever.

The currency became stronger when Pyongyang went off its highest level of military readiness last May, and its value returned to 1,200 won to the yuan. The won is currently trading at around 1,250 won against the yuan, Yoon said. The yuan has appreciated 171.7 percent against the won from two years ago.

“In 2009, when North Korean botched its currency renomination, anxiety spread that the local currency would become ‘paper money,’?” Cheong Seong-chang, a senior fellow at the Sejong Institute in South Korea, said. “Officials in North Korea prefer to receive bribes in yuan, not in won.

“When tensions escalate in North Korea, demand for the more stable yuan increases,” Cheong said. “And whenever North Korea makes an attack or other kind of provocation, the Chinese government tightens up procedures for visas and customs regulations on North Korean products.

That makes trade with China more difficult, resulting in a shrinkage in the supply of yuan into the country.”

Representative Yoon said the popularity of the yuan in North Korea also suggests more capitalist activity going on. “In a society that strictly bans the circulation of foreign currency, a wide range of individual transactions using a foreign currency is happening,” Yoon said.

“In some border regions with China, commercial transactions are increasing. The so-called Yuanization phenomenon - in which the yuan replaces a local currency - is happening in North Korea.”

Analysts in Seoul say the influence of China on the North Korean economy is ever expanding. “A strong yuan in North Korea indicates the regime is heavily dependent on the Chinese currency,” Kim Yong-hyun, a professor of North Korean affairs at Dongguk University, said. “That means that if China imposes economic sanctions on the regime, it would be a big blow to its economy.”

“As North Korea has no credit policies or system for financial transaction, residents are dependent on foreign currency for commercial activities,” Yoon said.

“As provocations by North Korea are putting its economy at risk, North Korea should stop all provocations, restore the value of its weak currency and stabilize its market.”