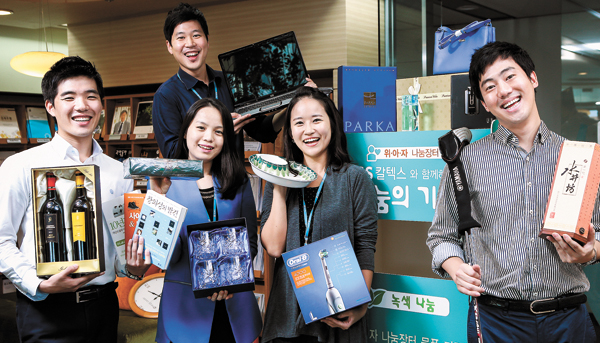 Employees at GS Caltex show their items to donate for the 9th annual WeAJa flea market to be held on Sunday at the nation’s four locations. By Park Jong-geun

Volunteers were busy this week preparing for the JoongAng Media Network’s ninth annual WeAJa flea market, which kicks off at 11 a.m. this Sunday at its new location in the more easily accessible Gwanghwamun Square in central Seoul.

Over the past eight years, about 2.74 million people have participated in the “WeAJa” charity flea market, which has donated more than 1 billion won ($929,526) to underprivileged children.

This year’s festival includes a plethora of items donated from government officials, celebrities and thousands of employees from national conglomerates, including 12 Seoul-based companies.

For the employees at GS Caltex, the event is something to look forward to. 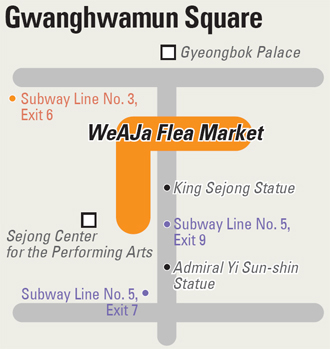 “We have participated in all of the eight WeAJa markets so far, not just as volunteers, but also vendors at our own booth,” said Lee Su-jeong, the director of Corporate Social Responsibility department at GS Caltex. “So everyone gets accustomed to doing so.

“It is really meaningful event for us, and I think it creates awareness for people to use their items wisely and share them with others later.”

This year at the market, attendees can shop for a charitable cause and participate in a wide variety of family-friendly activities. A string of personal belongings donated from celebrities also will be auctioned off.

Jo Jung-rae, author of the best-selling novels “Arirang” and “Han River” donated his glasses, which he has worn for the past 10 years, and an envelope opener.

Other notable items include a green dress contributed by actress Choi Ji-woo, a winter jacket provided by actor Jang Dong-keon, and a pair of dumbbell-shaped clocks donated by independent lawmaker Ahn Cheol-soo.

Three other locations will also host the flea market: Shinsegae Centum City in Busan from 10 a.m. to 2 p.m, and both Boramae Park in Daejeon and the plaza in front of Jeonju’s North Jeolla Provincial Government Building from noon to 4 p.m.

More information, also available in English, can be found at http://weaja.joins.com.