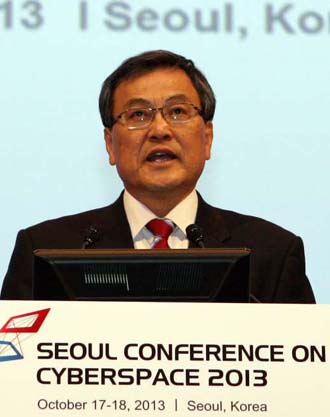 Minister of Science, ICT and Future Planning Choi Mun-kee makes a speech at the Seoul Conference on Cyberspace yesterday in southern Seoul. [NEWSIS]

President Park Geun-hye urged the international community to come together to tackle digital security threats in an opening speech of the Seoul Conference on Cyberspace 2013 yesterday.

“As the Internet environment develops, threats to cyberspace security such as leakage of personal information, spam and malicious codes are growing,” she said at the two-day event at COEX, Samseong-dong, southern Seoul. “We need to build together international regulations and principles to prevent such risk while guaranteeing the open nature of cyberspace.”

The conference is expected to formalize a protocol tentatively named the Seoul Protocol today, which will serve as guidelines for cross-border cyberspace crimes and their policing.

U.S. Secretary of State John Kerry also stressed the importance of cooperation in a video message to the conference.

“Although everyone is trying to make cyberspace safer and more accessible, not a single country can do it all alone,” he said.

Park also brought up the issue of digital polarization in her speech. Although the influence of cyberspace is growing every hour, some 4 billion people around the world are cut off from the Internet, which she dubbed “digital alienation.” The phenomenon cannot be neglected, Park added.

Korea is already sharing its experience in state-led projects for information communication and technology infrastructure, establishing electronic government systems in some developing countries, she said.

“Given cyberspace can potentially be used for either virtuous or vicious purposes,” he said, “a sufficient level of discussions among countries will be needed.”

The Conference on Cyberspace is the biggest international conference held since the Park administration began in February. The first day of the two-day event was based on the theme of “Global Prosperity Through Open and Safe Cyberspace” and was attended by 1,600 high-ranking officials, including foreign ministers from 87 countries, representatives of 18 international organizations and people from the private sector. The event will have general meetings and smaller panel sessions to discuss cyberattacks, hacking and the economic and social impact of cyberspace.

Seoul is the third city to host the conference, which was launched in London in 2011. The second conference was held in Hungary’s capital of Budapest.