Tongyang gets protection by court

Tongyang gets protection by court 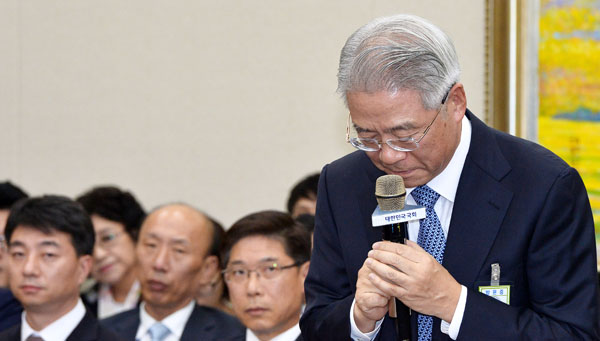 Tongyang Group Chairman Hyun Jae-hyun makes a public apology yesterday over causing losses to investors in the company. He was called as a witness at a hearing by the National Policy Committee of the National Assembly. [NEWSIS]

A local court yesterday granted bankruptcy protection for the beleaguered Tongyang Group to cope with its liquidity crisis as prosecutors investigate alleged fraud by the conglomerate’s chairman and top executives.

Tongyang Inc., Tongyang Leisure, Tongyang International, Tongyang Cement and Energy, and Tongyang Networks filed for the bankruptcy protection on Sept. 30 and Oct. 1 after they failed to pay back maturing short-term debts worth some 110 billion won ($103.4 million).

After granting the receiverships, the court appointed chief restructuring officers to the five companies after taking into account the recommendations of the companies and their creditors.

According to the court’s decision, Tongyang Inc., Tongyang Leisure and Tongyang International will be jointly managed by their current CEOs and outside restructuring officers.

“We decided to appoint third-party receivers to reflect the demands of creditors,” said Judge Kim Hee-jung of the Seoul Central District Court. “Because the companies are large, we also decided to allow the current CEOs to join the receivers to stabilize them quickly and effectively.”

Kim said Tongyang Cement and Energy was relatively sounder financially than the other affiliates, but the court still decided to put it under receivership because it will face a severe liquidity crisis by the end of this year. The company is expected to face an 80 billion won liquidity shortage.

The court decided to allow its current CEO, Kim Jong-oh, to oversee the firm’s restructuring without a court-appointed receiver.

The CEO of Tongyang Networks, Kim Cheol, was not given any future role because he is known to have close connections with the Tongyang owner family, which is under investigation.

Kim Hyung-kyum, a director of Tongyang Networks, was appointed by the court yesterday to oversee the restructuring.

The court said it will expedite the receivership process, and the first meeting of the creditors will take place in January.

The court’s decisions to allow four out of five current CEOs to oversee the restructuring reignited criticism that Tongyang Chairman Hyun Jae-hyun and his family decided to seek bankruptcy protections to maintain their management over the companies. Tongyang Securities’ labor union issued a statement yesterday saying that it was a premeditated move for Tongyang Cement and Energy, a healthy company, to file for receivership.

Hyun abruptly filed for court receivership for Tongyang Cement and Energy on Oct. 1 without consulting its creditors, raising concerns about moral hazard.

Hyun yesterday made his first public appearance since the scandal arose. He was called as a witness in the National Policy Committee’s audit of the Financial Services Commission at the National Assembly. Hyun issued an apology for losses to Tongyang investors.

“Investors trusted us and made investments, but they ended up incurring large losses and I am truly sorry about this,” Hyun said. “I cannot find any other way to express my sadness. I apologize sincerely.”

The prosecution has been investigating alleged fraud and malpractices by the group in issuing corporate bonds and commercial paper.

The prosecutors suspect that the 64-year-old chairman and senior executives at Tongyang Securities, the group’s financial arm, were aware of the possibility that Tongyang’s affiliates would be forced to file for court receivership but still encouraged the sale of commercial paper earlier this year.

The prosecution is also investigating accusations that the group deceived private investors by withholding information about the financial situation of its affiliates when it sold commercial paper and corporate bonds.

As the Tongyang crisis unfolds, about 50,000 private investors are on the verge of losing more than 2 trillion won in high-risk investments in the group.

At the hearing yesterday, Hyun denied that he made orders that caused the investors’ losses. He said he did not know what had taken place when sales were made to private investors.

When lawmakers pointed out that it is inappropriate for Tongyang executives to manage companies during court receivership, Hyun said investors’ losses will only be minimized when the companies are revived, and the court probably made the decision based on that notion.

He also said he gave up all management rights when he filed for the court receiverships and that he will offer his personal assets to reduce the investors’ losses.