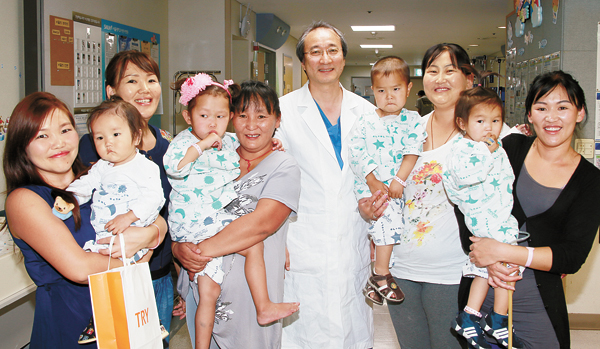 The 2-week-old baby had been born with tetralogy of Fallot, a congenital defect that changes the normal flow of blood through the heart. His tiny body was turning shades of blue, and there was nothing his father, a locomotive engineer, could do.

The transportation fee to a hospital in Ulaanbaatar, the capital, was too expensive, and a round-trip ticket cost about $20.

Then a few months later, as if by fate, word spread in his village that a hospital in Korea was looking to sponsor local children in need of free pediatric heart surgery.

Enkh-Amar’s father jumped at the chance.

Spots were limited, with the poorest and most critically ill patients given priority. More than 2,000 applications were submitted for children from across the country.

Enkh-Amar was one of the lucky ones.

His surgery, along with those of four other Mongolians, was sponsored by the Seoul National University Children’s Hospital in Jongno District, central Seoul, and the Korea Heart Foundation.

“Congenital heart diseases can be cured if the patient receives surgery at the proper time,” said Kim Woong-han, 50, the cardiac surgeon at Seoul National University Children’s Hospital who operated on Enkh-Amar. “I feel a great sense of accomplishment to see my patients recover just two weeks after the surgery.”

Since 2009, Kim has performed 156 pro bono heart surgeries on young patients, primarily those from underdeveloped countries like Mongolia, Cambodia and Uzbekistan.

A 1987 graduate of Seoul National University College of Medicine, Kim has been performing pediatric heart surgery since 1995. He reached a medical milestone in March, having performed 4,000 such procedures.

Kim developed a passion for medical volunteering in 1999 when he visited a children’s hospital in Harbin, northeastern China. Shocked to learn that the medical center had no cardiothoracic surgery department, Kim decided to invite doctors from the hospital to Korea for a training program the following year.

The program has continued ever since, with doctors from all over the world visiting Kim to learn from his expertise.

Last year, one of the men from the course became the first doctor to successfully perform a pediatric heart surgery in his native country of Uzbekistan.

“Saving lives is meaningful,” said Kim. “But when I take it a step further to improve [developing nations’ medical standards] by training their doctors, I feel like there’s also a diplomatic significance to my job.”

The mayor of Harbin, in China, recently acknowledged Kim’s humanitarianism with a special award, which will be presented to him later this month.

For Enkh-Amar, that favor was life-changing, and he was able to return home on Sept. 24 after a successful five-hour surgery.

“It broke my heart to see those adorable children suffer in pain,” Kim said, referring to his sponsored patients from Mongolia. “But seeing them [leave] the hospital with a healthy heart, I [can only imagine] what wonderful men and women they will grow up to be.”