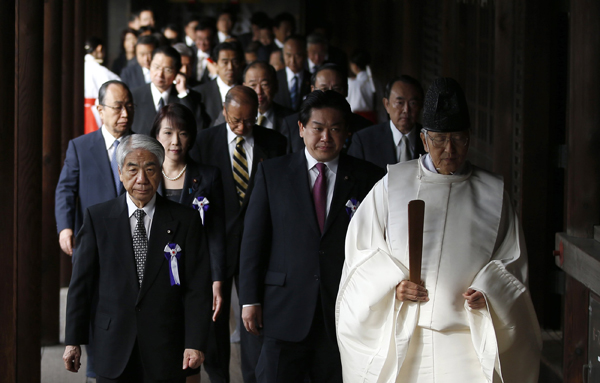 The Korean government expressed stern disapproval after 158 members of the Japanese Diet and a cabinet member visited Tokyo’s controversial Yasukuni Shrine yesterday, emphasizing that such visits glorify Japan’s militaristic and aggressive past.

On the second day of an ongoing autumn festival, around a fifth of Japan’s lawmakers and Yoshitaka Shindo, minister for internal affairs and communications, visited the shrine yesterday, which is seen as a symbol of Japan’s imperial past since it honors 14 Class-A World War II war criminals among other war dead.

Shindo claimed he visited the shrine in a private capacity, and told reporters that he didn’t think his visit would be “a diplomatic issue.”

The Korean Ministry of Foreign Affairs said yesterday that the Korean government holds a “consistent stance that Japanese politicians should not pay respects at the Yasukuni Shrine.”

The ministry also expressed regret that Japanese Prime Minister Shinzo Abe again sent a gift to the shrine, which it said “glorifies [Japan’s] past war aggressions and enshrines war criminals.” The Chinese Foreign Ministry also criticized Abe and urged Japan to “respect the feelings of China and other Asian war victim countries.”

On Thursday, the first day of the autumn festival, Abe made a ritual offering of a masakaki tree, traditionally used in Shinto rituals, in his name. Abe did not make a personal visit to the shrine, presumably to avoid upsetting Japan’s neighbors. Ties with Korea and Japan have been frayed under his government over historical and territorial issues.

This was the third time Abe made such an offering since he came into office last December.