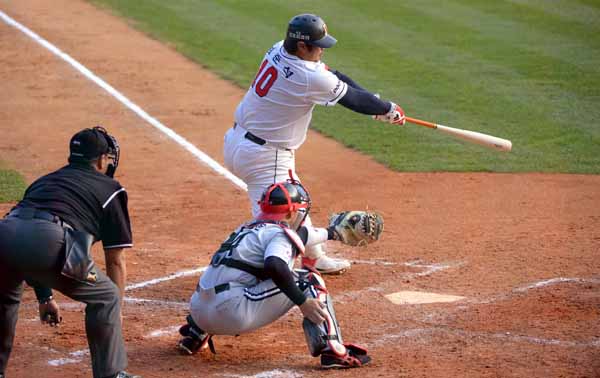 Choi Jun-suk of the Doosan Bears hits a home run in the bottom of the eighth inning of Game 4 of the second round of the KBO postseason. [NEWSIS]

The Doosan Bears defeated the LG Twins, 5-1, yesterday to advance to the Korean Series for the first time since 2008, thanks to the Twins’ lousy defense and poor sacrifice bunting. The Bears, who won the best-of-five series, 3-1, will take on the defending champion Samsung Lions in a best-of-seven series that starts Thursday.

Bears’ manager Kim Jin-wook changed his starting lineup to deal with sidearm pitcher Woo Kyu-min. Kim put infielder Min Byung-hun and outfielder Lim Jae-chul, both right-handed batters, in Game 3 to face lefty Shin Jae-woong at the top of the lineup, but replaced them with center fielder Lee Jong-wook and right fielder Jung Soo-bin, both left-handed batters who also have better speed on the bases, in Game 4.

The Bears scored the first run of the game in the bottom of the second, thanks to lousy defense by Twins’ first baseman Kim Yong-eui. With two outs and runners on first and second, Bears’ catcher Choi Jae-hoon hit a grounder to first, but the ball rolled to the Bears’ dugout after hitting Kim’s glove. Infielder Lee Won-Seok scored from second base.

The Twins blew their early chances with sloppy bunt attempts. In the top of the third, shortstop Son Joo-in reached first on a single with no outs, but was out at second on a fielder’s choice when catcher Yoon Yo-seob hit a sacrifice bunt to Bears’ pitcher Yoo.

In the top of the fourth, the Twins got their second chance as Yoo gave up two straight walks to right fielder Lee Jin-young and third baseman Jung Sung-hoon with no outs, but Lee hit into a fielder’s choice at third base and veteran Lee Byung-kyu, who started as the left fielder, bunted to pitcher Yoo.

The Twins earned another chance in the top of the seventh. Catcher Yoon reached first with a single and was replaced with pinch-runner Lee Dae-hyung. Veteran center fielder Park Yong-taik drove in Lee with a double, tying the game, 1-1. But that was it.

The dream of the Twins, who advanced to the postseason for the first time in 11 years, was destroyed in the bottom of the eighth. Bears’ slugger Choi Jun-suk pinch-hit for Choi Ju-hwan and blasted a home run to right field off Twins’ closer Bong Jung-keun. The next batter, Oh Jae-il, sealed the Bears’ victory with an inside-the-park home run. The Twins also struggled on offense, hitting .219 with runners in scoring position in the series.

“The Bears’ postseason experiences defeated the Twins, who rushed at many plays they have made,” baseball analyst Kim Jung-jun said. “They look like they were tired as they had three extra-inning games in the first round against the Nexen Heroes, but they were calmer in scoring chances and in defense than the Twins.”

The Bears have appeared in the postseason in eight of their past 10 seasons.

“I’m very proud of my players,” Bears’ manager Kim said. “Most of the players, especially pitchers, were tired, but Yoo pitched another outstanding game. The Lions are the best team in the league, but I think we can take the championship as we are in a winning mood.”