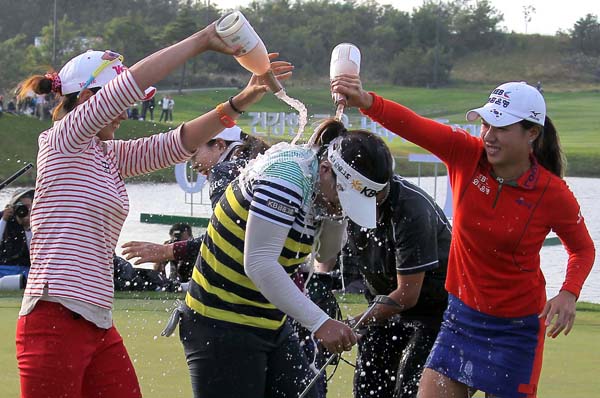 The winner of the only LPGA event that is being held in Korea this year was neither world No.1 Park In-bee nor her biggest rival, Suzann Pettersen of Norway.

Amy Yang, 24, of Korea beat Seo Hee-kyung in a playoff to win the KEB-Hana Bank Championship yesterday at the Sky 72 Golf Club on Yeongjong Island, Incheon. It was Yang’s first LPGA title in her eight-year career. She earned $285,000 for winning the event.

Yang and Seo ended regulation tied at 9 under par by birdieing the 18th hole, with a total score of 207.

In the playoff, which was held on the 18th hole, Yang drove to the deep rough on the right, but was able to draw a birdie chance by chipping out to the fairway. By making the 3.65-meter (12-foot) putt, Yang won.

Seo also made a bad start. She drove to the deep rough on the left. Her third shot, however, was too short, and her birdie attempt left her 10 meters from the hole. Her birdie putt missed to the left of the hole.

Yang cried her eyes out after Seo failed her birdie attempt, ensuring Yang’s victory. Yang debuted on the LPGA tour in 2008, but never won a tournament and finished in second place four times. She went to Australia to learn how to play golf in December 2004 and surprised the world by winning the 2006 ANZ Ladies Masters of the Ladies European Tour as an amateur when she was 16. She was the first amateur to win the event since 1984. She was nicknamed the “Michelle Wie of the Southern Hemisphere” after that event. She later won two more European Tour events, but struggled in the LPGA tournaments.

“I think I can make a new start in the LPGA tournaments from now on,” Yang said. “I never knew that I’m going to win my first LPGA tournament in my home country. I’m very proud of myself and want to enjoy this moment with my family.”

Seo, who is winless since she won the 2010 LPGA Tour Kia Classic as an invitee, again lost her chance to win her second career LPGA tournament. She took second place in the 2011 U.S. Open and 2012 Kraft Nabisco Championship. Seo lost to Jang Ha-na in the Hite-Jinro Championship of the Korean LPGA Tour that was held a week before the KEB-Hana Championship.

“This isn’t the end,” Seo said. “I will keep practicing until I can win a major tournament.”

Twenty-year-old Kim Sei-young led the event until the second shot of the 18th hole with 9 under par, but bogied the hole, finishing the event tied for third place with Michelle Wie of the United States, and Pettersen at 8 under par.

Wie started the final round tied for 22nd, but surged up the leaderboard with the day’s lowest score.

The world No.1 Park, who has been pursued by her rival, Pettersen, again failed to win a LPGA tournament as she finished tied for 28th at even par with a total score of 216, but was able to breathe a sigh of relief, at least for this time, thanks to Yang.