Seymour Stein has no ears, his new act no brain

Seymour Stein has no ears, his new act no brain 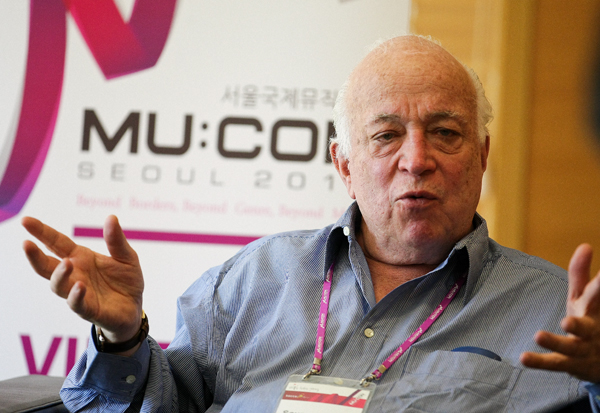 Seymour Stein, 71, cofounder of Sire Records - a record label that has signed renowned artists such as Madonna and Depeche Mode - recently visited Korea to speak at Mu:Con, a music conference in Seoul. Provided by Kocca

Seymour Stein, a 71-year-old music producer and mogul, in his own words may be a “little deaf.” At Mu:Con, a music fair and convention held Oct. 10 and 11 in Seoul, he had to ask people to “speak loud and slow” during a Q&A. But when it comes to picking hits and finding new stars, Stein definitely has the ear for it.

As the cofounder of Sire Records, Stein has signed such artists as Madonna, the Pretenders, Talking Heads and the Smiths. And now, for the first time in the record label’s 47-year history, Stein has signed a band from Korea - the veteran punk act No Brain.

Stein’s first encounter with No Brain was earlier this year in Toronto during Canadian Music Week. According to Stein, the band’s performance was so brilliant that he couldn’t sleep that night. The following day, Stein met up with the band and talked about signing a deal.

“I thought he was joking at first,” said Lee Seong-woo of No Brain. “But when we told him that we are going to perform in Brooklyn in March he said he would come and see us again and he really did.”

When Stein went to see the band perform the second time in Brooklyn, the whole event had been delayed for two hours. Stein said he had fallen asleep waiting, but when No Brain came on stage he was woken up by the band’s “ecstatic performance.”

“The minute they came on to the stage, I couldn’t sleep. It’s impossible,” said Stein.

While Koreans are all curious what charms No Brain has that attracted a music mogul like Stein, his answer was simple: He liked the band. “When I saw the band, I didn’t say, ‘If only they would change this and do this and that. I think they can be a big band and then I want to sign them.’ I saw what I saw, and what I saw I loved. So that’s why I’m signing them.”

The band will begin recording an album with Sire Records in January, but Stein will hand over the production job to Julian Raymond.

If Stein’s method of selecting an act doesn’t sound scientific, that’s because it isn’t. He just calls it his “know-how” - his reliance on having “no abilities in music.”

“I have absolutely no talent,” Stein said from the Mu:Con venue at the GS XI Gallery in Seogyo-dong, western Seoul. “I’m not saying this because I’m modest, I’m saying it because it’s the truth. My only talent comes from the fact that I am a fan, and I’ve been a fan since as far back as I can remember.”

Working in the music business and having no musical talent - he said he is not a good singer and doesn’t know how to write music or play any instruments - allows Stein to be “totally objective.”

“Let’s say a songwriter brings me a song. If I was a good songwriter, I could say to myself, ‘I can write a better song than this guy.’ But the reality is I can’t, because I can’t write a song. And I can’t sing - maybe in the shower, but that’s it. So I think this is to my benefit that I have no talent.”

Although he believes such a musical inability is his “claim to fame,” it used to be a fear back in the early years of Sire Records.

When he started the record company, his cofounder Richard Gottehrer was a “great musician and a great songwriter and even a pretty good singer,” according to Stein. Among many hits, Gottehrer wrote “My Boyfriend’s Back” and “Hang on Sloopy.” And in doing business, he often encountered talented people.

But he told a story of an incident that allowed him to get rid of his complex. 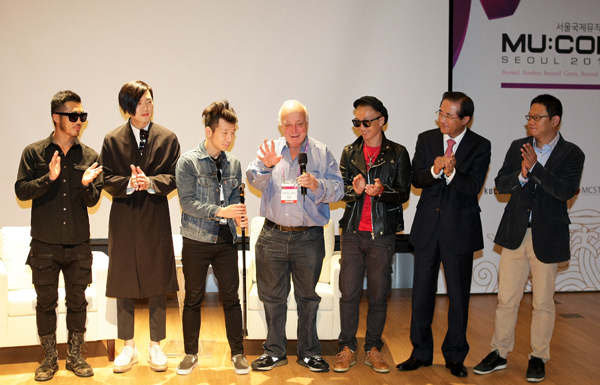 Korean band No Brain signed a record deal with Sire Records on Oct. 10, the first band from Korea to sign with the label. Provided by Kocca

One year, at the Windsor Pop and Jazz Festival, Stein was watching the bands play when one act in particular struck his fancy. After the show, he talked to a couple of his business partners about signing the group, but everyone was firmly against it.

But Stein said he had enjoyed grooving to the band’s set so much that he needed to get a massage after the concert - so he signed them.

The band that Seymour loved was Jethro Tull, which became one of the biggest British bands of their time.

“That got me over my complex about not being able to sing or write or play an instrument. I’m glad that I don’t,” said Stein. “I think as a fan I can be far more objective because I don’t compare.”

Stein’s love for music, especially rock’n’roll, began at an early age when he tracked the Billboard charts. At the age of 13 he went up to the Billboard office, just to see how the place worked, and when he finished high school he got a job at Billboard, working in their chart department.

After working there for three years he moved to King Records, then in 1966 he started Sire Records with Gottehrer.

Although most Koreans think that producers and talent agencies control their artists’ every move, Stein says that’s not his style.

“I don’t interfere with the artists’ songs,” he said. “I didn’t with Madonna or with Talking Heads or Echo and the Bunnymen. They are the geniuses. I just judge the fact that I like them.”

But Stein does have his strategies. For instance, with new bands he likes to start small and cheap - which is actually an artistic decision.

“If you sign an artist, like some major record companies do, and give them an album deal for a million dollars and then that album doesn’t happen right away, the record company wants to get rid of that artist,” he said.

“I try to cover the cost of the record, expenses and no more. Then, when the record shows a little bit of sign starting to happen, then we go ahead and ahead. The Ramones didn’t happen in America until the fourth album and even then not huge. The Talking heads, it was the third album. Depeche Mode, the third album. And so on.

“If I had given them a ton of money, it would’ve been very hard for me to keep them. There are some major labels that would give an artist a lot of money, and when that very first album is finished if they don’t like it enough they say, ‘Here’s your album, take you money, good luck and good-bye.’ That’s such a bad mark.”

As a business man in the music industry, Stein believes that it’s his job to give every break he possibly can for his artists.

“Artists don’t seem to have long careers,” he said. “We all owe it to give the artists every break we possibly can.”