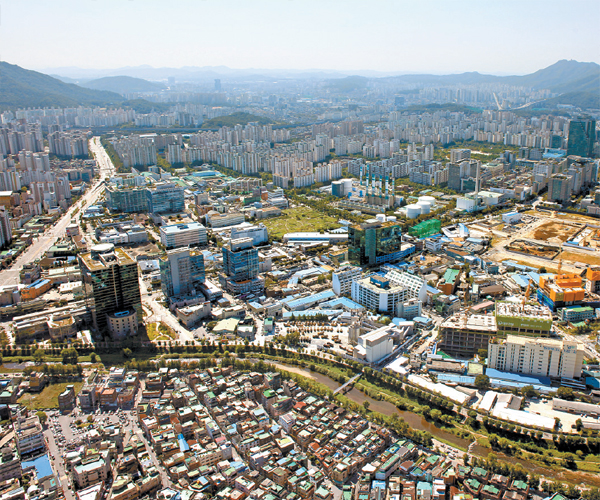 About 40 businesses plan to open offices or facilities in the Smart Square industrial complex in Pyeongchon, Gyeonggi. The complex should create about 56,000 new jobs, spiking demand for nearby apartments. Provided by Posco E&C

Since the 2008 financial crisis, there has been a notable change in Korea’s housing markets. In the past, housing prices usually surged where “new town” developments were taking place. But now, the hottest markets are those near new industrial complexes, where Korea’s mighty conglomerates are building large projects.

Because of this, the booming areas in Korea for real estate at the moment are not even in Seoul. Instead, they are in Anseong, Osan, Pyeongtaek and Icheon, all located about one to two hours from the nation’s capital.

“After Samsung Electronics decided to open a production facility in the Godeok Industrial Complex, demand for apartments spiked,” said Ha Seon-sook, a realtor in the region. “We haven’t heard of any downturn here.” 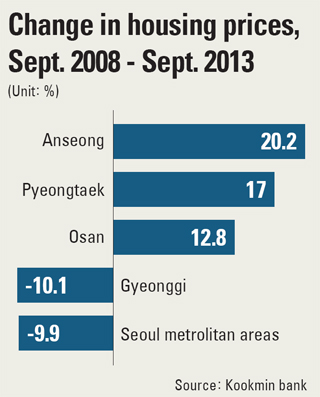 Samsung announced plans last year to build a series of manufacturing plants and facilities on about 3.95 million square meters (989 acres) of land in the Pyeongtaek complex; facilities that will cost about 100 trillion won.

In Daegu earlier this month, more than 16,000 applicants applied to buy one of 1,713 new apartments being built near two large developments.

“Since there are two big national development projects being built here, people want houses nearby,” said Kim Jong-seok, a sales manager of the I-Park Apartment.

In Daegu Technopolis, a specially designed R&D zone slated for completion at the end of the year, about 80 companies are planning to move in.

Relocating businesses have become a boon for the otherwise moribund property market. New industrial parks require employees, which means higher demand for housing in the area, causing prices to spike.

According to a Kookmin Bank survey of housing prices across the nation between September 2008 and September 2013, the average price of apartments in the Seoul metropolitan area dropped 9.9 percent. The only price rises in Korea over that period were in Anseong (up 20.2 percent), Pyeongtaek (17 percent), Osan (12.8 percent) and Icheon (5.2 percent) out of 64 cities across the country.?

In all those locations, major industrial complexes are in the works.

“It is a clear indication that demand for houses in areas where there are jobs and businesses operate, unlike in new town areas created only for residential purposes,” said Kim Seon-deok, head of a construction industry research institute.