Preaching the gospel of start-ups

Preaching the gospel of start-ups 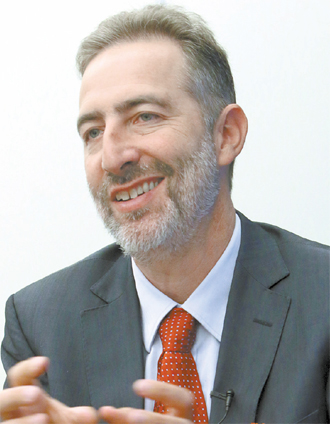 While there are many debates on the effectiveness of the so-called “creative economy” pushed by the Park Geun-hye government, Saul Singer, the co-author of the best-selling book “Start-up Nation” expressed support, saying Korea is heading in the right direction.

“Even though Korea needs to do it in its own way, the Israeli experience shows the creative economy is the right way to go,” Singer said, in a recent interview. “I think even more so looking forward in the future.”

Singer, an American-Israeli journalist, was in town last week to speak at the 14th World Knowledge Forum, where he shared his thoughts on building creative nations and how Israel has boosted start-ups and attracted venture capital. “Start-up Nation,” which he co-wrote with Dan Senor in 2009, also addresses the question of how a small country like Israel produces the largest number of start-ups per capita in the world.

“We’re dealing with a lot of uncertainty and we’re also dealing with a very rapid pace of change, which in the next 10 years will be much greater,” Singer said. “It seems obvious that a country needs to have a creative economy to help keep up.”

Q. Creative economy has become a buzzword in Korean society. But its meaning still seems vague. How do you define it?

Why are start-ups so important?

Just few days ago, there was a piece in the Wall Street Journal on how Samsung is looking for start-ups to buy and invest in. Some of the ones they’re looking at are in Israel. IBM has bought 12 start-ups in Israel and Cisco 10 to 12. Why did Google just buy Waze, an Israeli start-up, and why did Facebook buy a company in Israel? I think the answer is that they [start-ups] are bridging the gap between what start-ups are good at and what big companies are good at. Start-ups are great innovators. They have no idea how to scale. Once they invent something fabulous, it’s working, growing and people love it. But the thing is, how do you turn that into a big company? You can get from zero to $1 million [sales], but how do you get from $1 million to $1 billion or $10 billion? It’s a completely different kind of business.

Big companies, on the other hand, have the opposite problem. They’re great at scaling, that’s what they do. But they have trouble with innovation. They have great talented people, lots of patents, and they are innovating, but it’s more innovation around existing products. It’s very hard for them to come up with whole new kind of business.

Why is Israel so good at boosting start-ups and what advice would you give Korea?

I would like to first say that the innovation sector that Korea is building is going to be different from Israel’s and different from Silicon Valley. For Israel, overcoming adversity was a huge part. Here we were, a tiny country with no resources and a bad neighborhood. We had to overcome all that. Also, since our military has never been able to rely on a large number of people or weapons, we’ve had to rely on both technology and motivation. What we argue as the reason why the military has had an impact on innovation for us is because it’s taught people things they don’t learn in school like leadership, teamwork and sacrifice for something larger than yourself out there, and maybe the most important thing for an entrepreneur is mission-orientation. As for America, it’s a big country, lots of resources and no enemies. Completely opposite situation, and yet they produce Silicon Valley. What this shows is that every country has its own path based on their own history, culture, strengths. The lesson from Israel is that it can be done, not necessarily “do it like Israel,” but “do it like Korea.” But also “do it with Israel.”

What would be the role of the government in supporting start-ups?

Governments tend to look mainly at the issue of finance in general, R&D spending and building technology parks. Those things can be useful, but governments tend to neglect the softer side. They need to talk to entrepreneurs, talk to start-ups and ask them what’s making their lives more difficult, whether it’s taxes, regulations or bureaucracy. It’s often easier to spend money than to remove obstacles.