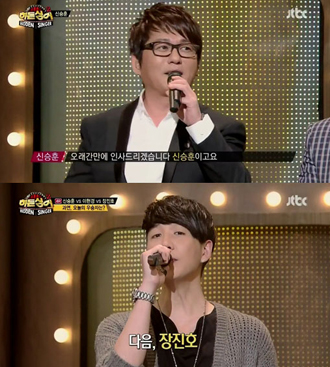 With a career spanning 23 years, no one would deny that singer Shin Seung-hun is one of the nation’s most renowned ballad singers.

However, Shin was defeated by an impostor during the second season of “Hidden Singer” on JTBC, the first time an impostor beat an original singer.

The singing competition pits veteran singers against amateur singers who perfectly imitate their established counterparts while a judging panel and audience members listen as the singers perform a few verses while hidden behind curtains.

After each performance, the judges and panels cast their votes for the singers they think are behind the curtains. During Saturday night’s show, however, Jang Jin-ho, who was competing against Shin, earned two more votes than Shin and became the first winner of the show.

Jang, who is a longtime fan of Shin and a lead vocalist of the obscure operatic pop group La Speranza, earned 20 million won ($18,597) in prize money.

Shin congratulated Jang for his win, saying, “I have achieved a lot of dreams, but Jang still has a long way to go. So I will root for him, and I think he deserves to [achieve more dreams].”