Succession seen near at Samsung

Succession seen near at Samsung 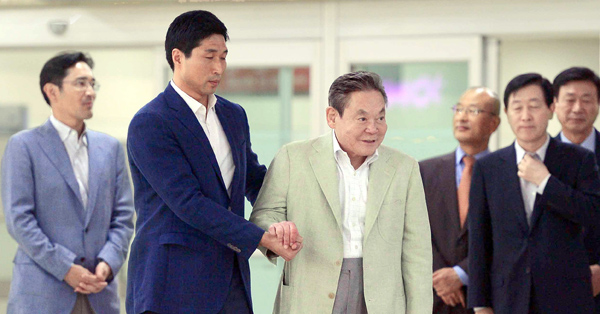 Samsung Electronics Vice Chairman Lee Jae-yong, left, escorts his father and Samsung Electronics Chairman Lee Kun-hee, right center, when the senior Lee returned from an overseas business trip and walked out of Gimpo International Airport in Seoul with the help of an attendant on Oct. 4. The chairman’s age, 71, makes every small change in the management of the sprawling Samsung Group of interest as another step to the eventual succession of his son, 45, as leader of the dynasty. [NEWSIS]

When Samsung Electronics was about to launch a liquid crystal display panel business in 1991 - a business that would a decade later become another engine of growth to rival its success in semiconductors - Lee Kun-hee, into his fifth year at the helm of the group, sent a New Year message addressed to the 180,000 Samsung employees.

“Becoming a company of the world’s highest order, no matter how rugged and difficult path it may be, should be our sublime value and a goal we need to realize and leave to the next generation,” the chairman, then 48, said.

The first task, in many observers’ eyes, has been achieved, with the Korean enterprise among the gems in the global business world. Its brand value was $39.61 billion in September, ranking it the world’s No. 8 most-valuable corporation, a notch up from last year, according to Interbrand’s Best Global Brands Report for 2013.

But, the second task, including Lee’s management of the transition when he retires, is unfinished and increasingly coming into focus with the maturing of his only son, Lee Jae-yong, who joined Samsung Electronics as a general manager in 1991.

The senior Lee, now 71, shows signs of slowing down, and every small change in the management of the Samsung dynasty, such as the merger or handover of businesses among its several affiliates late last month, is seen by Samsung-watchers as another step to completing the succession.

Further hints about the next move may be revealed next Monday when Lee Kun-hee, who returned in August to his job as Samsung Electronics chairman after having health problems, attends a delayed event to mark the 20th anniversary of his Frankfurt declaration of new management. The ceremony at the Hotel Shilla, to which the executives of all of Samsung affiliates have been summoned, may be where management will unveil a new blueprint that will shape its next decades, a good portion of which will likely be led by Lee Jae-yong. It will also be an interim assessment of the junior Lee,who was promoted to vice chairman of Samsung Electronics, the group’s flagship, last December before the annual leadership changes slated for upcoming December.

The current picture, at least of Samsung Electronics, looks good for the Harvard-educated heir-apparent, also known as Jay Y. Lee. Samsung Electronics is expected to confirm its early guidance figure for third-quarter performance, which it estimated would surpass a 10 trillion won ($9.35 billion) quarterly operating profit for the first time.

The tech giant, which overtook Apple as the world’s largest smartphone seller in 2011, has taken aggressive steps to continue its momentum. On Oct. 10, it released the Galaxy Round, the world’s first curved smartphone, with which it appears to be taking an early lead in a more innovative smartphone market.

The smartwatch Galaxy Gear, another world’s first, and its main connectable device, the Galaxy Note 3, will help continue Samsung’s record sales run at least until the next quarter, many analysts predict.

But, as much attention as Samsung Electronics’ short-term success gets, questions linger over the company’s and group’s long-term strategy. And the uncertainty is substantial: Can Jay Y. Lee pull off the same global success as his father did in the face of unprecedented challenges from competitors? Some say his succession is far from assured, considering the growing wariness of Korean society to the family’s dominance.

“It is a crisis for Samsung, and potentially a crisis for the whole country,” said Kim Dong-one, a business administration professor at Korea University. “More than 60 percent of the profits of Samsung come from Samsung Electronics, and 60 percent of Samsung Electronics’ profits come from mobile phones. If the mobile sector does not work out, it will have a huge impact on the Korean economy,” said Kim, adding that Samsung accounts for more than 30 percent of Korea’s GDP.

“But, it also could be an opportunity for Lee Jae-yong to prove his ability, which is yet to be tested, and show that he is an apt successor,” he said. 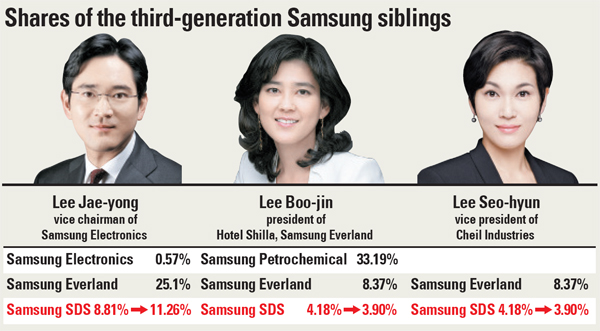 How the junior Lee assures his leadership in the boardroom depends on how much power he will be given or can seize within the group. His father has long been thought to have drawn up the big-picture plan for the succession, in which Jay Y. Lee gets the group’s two core sectors, electronics and finance, while his two sisters will split the other businesses. His sister Lee Boo-jin, 43, is expected to inherit the accommodations and construction businesses such as the Hotel Shilla and Samsung C&T, while his sister Lee Seo-hyun, 40, is to assume control of the fashion business.

The plan appeared to be backed up by the announcement of a merger between its two information and telecommunications project firms, Samsung SDS and Samsung SNS, which lifted Jay Y. Lee’s share in Samsung SDS from 8.8 percent to 11.3 percent. That gives more power to Jay Y. Lee, already the largest individual shareholder of the country’s largest IT solution provider, which is outside the complex web of cross-sharing in the group and is likely to be financial ammunition for his eventual takeover of the entire group. Samsung Electronics is the largest shareholder of Samsung SDS, with 21.7 percent. The two daughters’ share in Samsung SDS dropped to 3.9 percent each.

If Samsung SDS means money for the son, Samsung Everland means power. The resort and golf business, the de facto holding company of the group, announced on Sept. 23 that it was taking over the fashion arm of Cheil Industries at a price of 1.05 trillion won. It is, the company claims, a step to streamline Cheil Industries, a Samsung unit, into an electronic materials company. Up to 80 percent of Cheil’s profits are made from the electronics material business. Some market observers, however, read a deeper meaning into the move. If all electronics-related affiliates come under Jay Y. Lee’s control, Cheil Industries will now be among them, while he maintains his position as the largest shareholder in Samsung Everland with a 25.1 percent share.

Samsung Everland will take over the fashion businesses from Cheil Industries on Dec. 1. Samsung SDS will absorb Samsung SNS on Dec. 9.

Samsung denies that these are calculated moves for Jay Y. Lee’s benefit, saying the decisions are made solely for the benefit of the companies involved.

“It is just to create synergy for those concerned companies. No more, no less,” said an official of Samsung Group.

But not many take that claim at face value, coming from a conglomerate that has long been shrouded in secrecy.

“Are the changes of hands that are taking place within Samsung Group part of a succession scenario for his son and daughters? Yes, I think so,” said Park Sang-in, the head of the market and government research center at Seoul National University’s Graduate School of Public Administration.

“A picture was probably painted during the second half of last year,” said Park, citing an insider source at Samsung that he did not identify, “and according to it, Lee Jae-yong will get big chunks of the group such as Samsung Electronics and Samsung Life Insurance.”

More changes could come when Samsung affiliates submit their 2014 business plans to the group, probably by the end of this month. The plans will probably be revised and confirmed next month.

The three third-generation siblings hold insignificant shares in many non-core businesses within Samsung Group, and observers say no matter how smooth a succession scenario is drafted, implementing it won’t be easy given the increasing pressure on corporate governance of family-owned conglomerates in Korea.

“Tongyang’s crisis is a good reminder of how important corporate governance is, and that could be a lesson Samsung can pay attention to when it determines its corporate governance under the next generation of leadership,” said Kim Kab-lae, the head of corporate policy at Korea Capital Market Institute.

Such external pressure could cause the three Lee siblings to take less of the pie than their father intends.

“As we see many cases in the United States and Japan, conglomerates get dissolved over the passing of time as it becomes more difficult for owners to bequeath their wealth to their successors,” said professor Kim of Korea University. “The owners’ shares in Samsung will also get smaller.”

And that may prompt the other siblings to stand up against Jay Y. Lee to claim a bigger stake in the group, a quandary that their father is facing.

Since last year, Lee Kun-hee has battled with his elder brother, Lee Maeng-hee, who is challenging in court what had once been generally accepted as true: Lee Byung-chull, the group’s founder, decided on Lee Kun-hee, his third son, as his sole successor.

Chung Sung-sup, CEO of Chaebul.com, a Web site specializing in Korean conglomerate tracking, said concerns over a potential family feud are prompting Samsung to work on a succession scenario that will be quick and complete.

“The first generation starts it, the second generation makes it prosper and the third generation dissipates it, and Lee Jae-yong is taking on a difficult task to prove that such is not the case for Samsung,” Chung said. “In Korea, there are some exceptions to that scenario, but becoming one won’t be easy.”