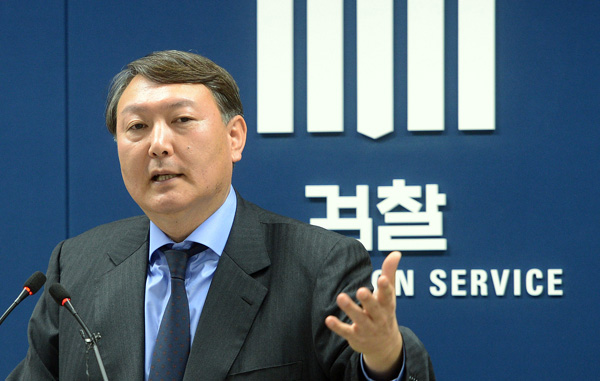 The national spy agency’s alleged interference into the 2012 presidential election is emerging as a hot issue during the National Assembly’s annual inspection of the Park Geun-hye administration, with new allegations being made by the main opposition party and the prosecution.

“According to the prosecution’s application submitted to the court to go to trial over the NIS’s online smear campaign, the prosecution confirmed that the workers of the NIS psychological warfare team actively interfered by manipulating public opinion by posting a total of 55,689 tweets,” Representative Lee Chun-seok of the DP said at a press briefing yesterday. “It means they posted an average of 510 tweets per day … that is apparently full-scale interference with the election.”

As evidence for their claim, a group of DP lawmakers produced a 2,400-page document written by the prosecution supporting its request for a court trial in the case, documents that included the prosecution’s investigation into the tweets.

Representative Yoon Sang-hyun of the Saenuri Party responded that not all of the tweets were confirmed to have been posted by the NIS.

“The prosecution has confirmed only 2,233 posts as evidence in the NIS case,” Yoon said. “They just assumed that the remaining tweets had been posted by the NIS, without any evidence.”

The ruling party members complained that the DP was focusing too much on a political fight against the Park Geun-hye administration rather than state affairs during the inspection.

In particular, the Saenuri criticized the DP for restarting its outdoor protest at Seoul Plaza on Saturday, using the same slogan: “Restore democracy, reform the NIS.”

“The DP has promised to focus on the parliamentary inspection,” Kim Tae-heum, spokesman of the Saenuri Party, said. “But they once again started their ‘street politics.’”

The DP is also talking about a senior prosecutor who was in charge of the investigation into the case but was recently dismissed. He has been under fire for arresting three NIS agents without approval from the Justice Ministry.

On Oct. 17, Yun Seok-yeol, head of the Suwon District Prosecutors’ Office’s branch in Yeoju and who was leading a probe into the alleged tweets by the NIS, ordered his investigators to raid the houses of four NIS agents and arrest three of them.

Although Yun had an arrest warrant issued by a local court on Oct. 16, he apparently should have reported his arrest plan in advance to the justice minister and the head of the Supreme Prosecutors’ Office. Under current law, arrests of spy agency officials require that additional step, which Yun did not take.

“I told him that he must follow the legal procedure,” said Jo Yeong-gon, head of the Seoul Central District Prosecutors’ Office and Yun’s supervisor. He was speaking to the JoongAng Ilbo by phone. “But he refused to do so and told me, ‘The Justice Ministry would never allow me to do that.’”

The NIS protested the arrest of its agents to the prosecution. Yun finally released the three at about 9 p.m. on the day of the arrest, and was dismissed from his position as leader of the probe the following day.

“If a prosecutor ignores the procedures of notification to superiors, he could arrest whomever he wanted,” said Lee Jin-han, a senior prosecutor at the Seoul Central District Prosecutors’ Office.

DP politicians say they suspect that the government pressed the prosecution to dismiss Yun.

“The dismissal means the government is trying to hush up the case,” said Park Young-sun, a DP lawmaker.

Representative Yoon replied that the dismissal was the right decision under the law.

“Yun abused his right of investigation, which was unprecedented, and ignored legal procedures,” Yoon said. “So the prosecution took the step by itself.”