Park seeks a new image for her father’s Saemaul

Park seeks a new image for her father’s Saemaul 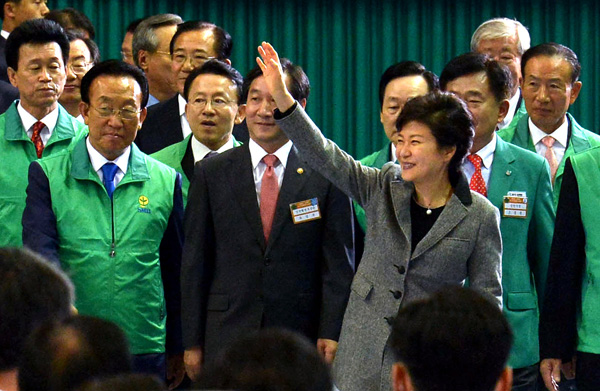 President Park Geun-hye proposed a new direction for her father’s Saemaul movement in a speech in South Jeolla yesterday, calling for a “community movement, creative movement and global movement.”

Forty-three years ago, President Park Chung Hee mapped out Korea’s rural program in an effort to spur rapid growth in the 1970s and 1980s.

“The Saemaul movement was a spiritual revolution that has entirely changed our contemporary history,” Park said in a speech at the 2013 National Saemaul Leader Convention at the Palma Stadium in Suncheon, South Jeolla, yesterday. “With a strong will to ‘live well all together,’ we made a heroic story of success together.

“We expect you to revise the content and the action plans of the Saemaul movement in your own way and turn it into a future-oriented, revolutionary movement for a more developed sense of citizenship,” she said.

“The spirit of the Saemaul movement was living well ‘all together,’ not only alone,” Park said. “The restoration of the spirit of the community is an urgent task for us.”

When it comes to the “global movement,” she urged people to promote the campaign worldwide.

Yesterday, Park made her second trip to South Jeolla since her inauguration. Before she attended the Saemaul movement convention, she toured the 2013 Suncheon Bay Garden Expo, which ended yesterday. Her first trip to the region was on May 18, when she visited the ceremony to commemorate the victims of the Gwangju massacre of 1980.