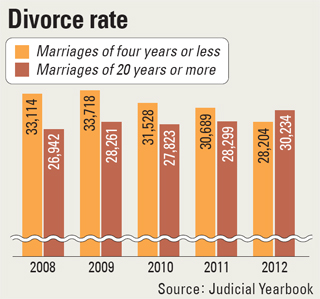 Last year, nearly 330,000 couples tied the knot, vowing to love and care for each other until their hair turned grey and beyond. But about a third of those couples, more than 110,000 pairs, last year found it too hard to honor those vows.

According to the Judicial Yearbook released by the Supreme Court yesterday, 329,220 couples married last year, down 0.7 percent from the number in 2011.

Meanwhile, 114,316 married couples called it quits, a 0.7 percent increase in the number of divorces from the previous year.

Breaking down divorce cases filed last year, 26.4 percent were marriage dissolutions of 20-year-plus marriages. Couples together for four years or less were 24.6 percent of all filings, the second largest group.

There has been a steady rise in the dissolution of long-term marriages; those in the 20-year group divorced at a rate of 7.3 percentage points higher than in 2006. Those who lived together for five to nine years accounted for 18.9 percent of the total divorce cases last year, followed by those married for 10 to 14 years, at 15.5 percent.

Forty-seven percent of all marriages ended last year were those of childless couples; 26.3 percent had one child and 23 percent had two children. Divorces affecting three or more

children were 3.6 percent of the total. Only a small minority of the divorces, about 22,500, were contested. Divorce decrees were issued by mutual consent in the other cases.

Personality differences were singled out as the biggest cause of divorce, named in just under half of the divorces. Financial hardship was called the cause of about 13 percent, and adultery was cited as the reason for just under 8 percent of the filings.

Just over half of the women who were newly divorced last year were not employed outside the home.

About a fifth of them worked in sales or services, about the same percentage as men whose marriages were ended. Just under a fifth of those divorced men were unemployed.