Incheon customs crew has seen it all

Incheon customs crew has seen it all

A total of 98,383 smuggled items impounded at the customs office of Incheon International Airport as of June. Among them, 3,943 were luxury goods like bags and watches. By Cho Young-choel

Last month, all passengers traveling on a flight from Hawaii were asked to have their bags X-rayed when they arrived at Incheon International Airport.

One passenger was asked to open her bag when an inspector saw in the X-ray a metal Chanel logo on a handbag. She complied, even though she had bought the handbag in France three years earlier. The bag was obviously several years old and well used.

The customs officer was thinking along a different line. “You have to pay the tax even though three years have passed,” he told her. “Products not declared within five years are still subject to tax.”

Another traveler visiting relatives in Europe bought a $2,950 watch at a duty free shop to take along as a gift. He returned to Incheon without the watch, but customs officers still took a look at his spending habits. In the record of his purchases at duty free shops in Korea, they found a $700 ring listed - which he had on his finger. His tab came to 73,000 won in duties.

Although both travelers admitted they were guilty of evading taxes, they were still furious because they believed they had dodged the tax man fair and square.

Dodging him once isn’t good enough. Korea’s customs law has a statute of limitations of five years from the date that duties could have been imposed. Hide your Gucci bag for 60 months and you’re home free. Until then, watch out.

Travelers report that customs inspectors at Incheon International Airport are taking no prisoners these days. Some speculate the stepped-up scrutiny is part of the government’s effort to root out the underground economy and increase revenue. As with the plane from Hawaii, other group inspections have been conducted on planeloads of passengers arriving from Europe.

Last Monday at Incheon International Airport all 484 people on two planes from London and Paris were asked to have their bags X-rayed, crew not excepted. As the officers peered at the monitors, more and more passengers were stopped for thorough examinations. One woman opened up her bag and an inspector found a Louis Vuitton handbag.

“I brought it back because my daughter, who is studying abroad, wasn’t using it,” the woman said. Although the bag looked brand new, the customs inspector decided that the woman was being truthful because the handbag’s design was an old one.

Many people say, “I bought this a long time ago” or “This is the one I’ve always used” when caught at customs. But the inspectors know their luxury goods. They can tell the brand, price and year of a bag or a watch at a glance. Some products have serial numbers, which makes it even easier for inspectors to determine where and when it was produced. Another passenger proudly approached the customs booth and said she wanted to declare a Burberry bag. But the thing that caught the inspector’s eye was the Chanel bag strapped to her shoulder. “It’s a gift from two years ago,” the woman said. But he knew it was this year’s latest design.

The matter was quickly resolved, however, when the inspector made a comment guaranteed to chill the heart of any inveterate shopper: “If you don’t tell us the price now, we can’t impose a tax on this bag. So we’ll have to hold it here until we find out how much it cost.”

The passenger persisted until the inspector produced a plastic bag and started to pack the handbag in it. She named the price and paid the duty.

On selected flights, bags go through an X-ray inspection before being sent to the terminal’s carousels. During that inspection, customs agents put an electronic tag on suspect bags: red for prohibited items, yellow for dutiable items, green for plants and fruits and orange for meat products. 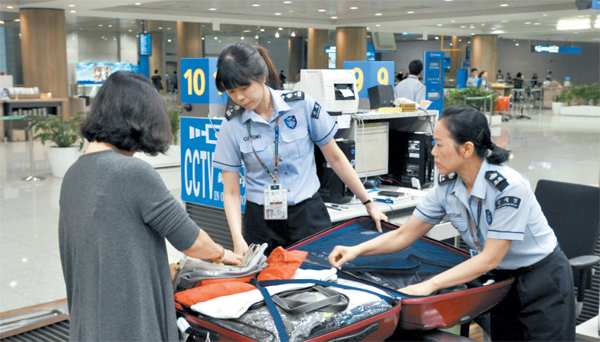 As passengers head toward the customs declaration counters, the tags begin playing a jingle to alert agents. Those bags must be opened by their owners in front of an inspector. Last Monday, as more and more tagged bags from the two closely-watched flights emerged, the jingles sounded up and down the row of inspection tables.

The X-ray inspection of bags just off the plane takes about two seconds per piece of luggage. In that short time, sharp-eyed inspectors peering at their monitors can spot and identify most suspect items. On Monday, there were only yellow-tagged bags from the planes from Europe: dutiable items, mostly luxury goods.

More than 30 people had to pay duty that day on expensive goodies they carried in despite their many explanations: “My daughter bought it as a gift,” “These Hermes accessories were presents,” “The Chanel bag is a gift from Mom.” And many passengers, catching on to what was happening, decided pretty quickly that declaration was good for the soul.

“When we do a complete luggage X-ray inspection, it increases the number of people who declare goods,” a customs employee said.

But whether to save money or just for the thrill of getting away with something, attempts at tax evasion endure.

A common one is to declare less expensive items and hide the expensive ones: One man declared clothing over the $400 duty free allowance but hid an expensive watch in his luggage.

Inspectors, either because they are cynical or because they are experienced observers of people (or both), give no points to a traveler who declares items. They don’t automatically assume there is nothing left undeclared. And there is little new under the sun: A new shoulder bag worn inside a coat is something these inspectors have seen before.

Incheon Airport set passenger records during the July 1 to Aug. 15 vacation season. Customs officials caught nearly 38,000 people trying to smuggle in goods and charged them duties, and barred the entry of goods or sent them to quarantine.

The number of incidents in that period was actually a drop from the same period in 2012 when more than 45,000 people were stopped. The rate of random baggage checks held steady at about 3 percent.

Front-line customs officers say their job is often uncomfortable. They confront people who lie to them and who sometimes turn violent. There are also fights between traveling couples who blame each other when they are caught.

There are 885 employees of the customs service at Incheon; 336 handle passenger and flight crew inspections. “Although there is an increasing number of travelers every year, the number of employees is steady,” one member of staff noted.

Workers say there is one taboo question. Under no circumstances will they ask a passenger being inspected, “Why did you buy so much?” If passengers declare and pay the duties, it is not the officials’ concern, they say, how much someone spent on shopping.