Veterans show they’re better than ever

Veterans show they’re better than ever 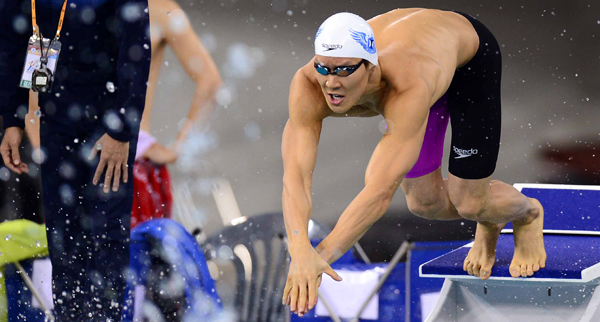 Star athletes are dominating the 94th National Sports Festival that started on Friday in Incheon, the host of the 2014 Incheon Asian Games.

“I’m very happy with the result,” Park was quoted as saying after yesterday’s race.

“I’m currently aiming to win the 2014 Asian Games, and I think I’m in very good shape. I tried to finish the 200 meter race within 1:47 as my coach, Michael Bohl, told me to do so, and the record was way better than my expectation. I don’t worry about the remaining two races because I’m just trying to enjoy this event and meet many fans ahead of Asia’s biggest sporting event. I think I can race well next year as well if I maintain my physical condition just like now.” Park won five gold medals in the 2007 and 2008 events. 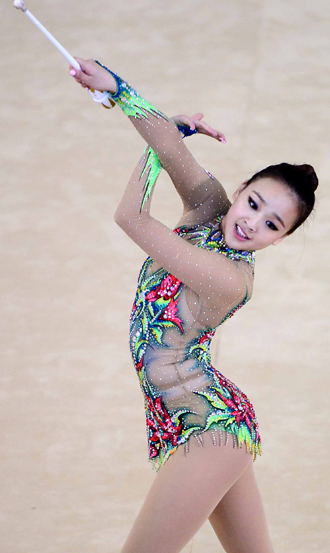 Gymnast Son Yeon-jae performs with her clubs during the rhythm calisthenics final on Sunday. [NEWSIS]

Ahead of the event, Park said that the sports festival would be a new beginning in his swimming career. There have been rumors that Park might retire as he was disqualified in the men’s 400 meter freestyle preliminary round in the 2012 London Olympics. The referees reversed their decision, but Park finished second in the final. After the London event, he failed to extend his sponsorship contract, had a hard time financing his training, and he wasn’t able to participate in the Barcelona FINA World Championships in July.

From March, however, Park started receiving support from the Incheon city government, which needed as many stars as they could find for next year’s Asian Games. Park declared that he will retire after finishing the Asian Games. Woo Hyung-chul of the SJR company, a private academic lesson service provider, donated 500 million won ($475,000) to Park for one year.

“I think this is a good sign for me,” Son said after the match. “Since my ultimate goal is winning the Asian Games and the 2016 Brazil Olympics, it was a good pre-exercise for me as I need to prepare well for them.”