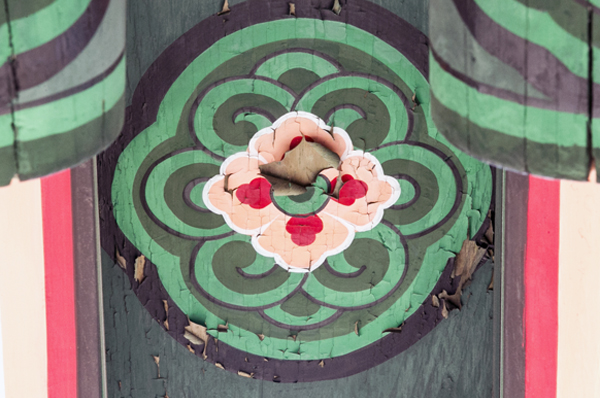 The lotus patterns on the first floor of Sungnyemun, a 600-year-old gate in Seoul, display tears just five months after its five-year restoration. By Cho Yong-chul

Is Sungnyemun suffering once again?

Concerns are mounting that the newly-restored Sungnyemun, the 600-year-old gate in the heart of Seoul, has not been restored properly.

At the ongoing parliamentary audit, lawmakers have criticized how in just five months after the restoration there is substantial cosmetic damage to the gate, in particular to the dancheong (traditional color decorations for Korean wooden structures), which is supposed to be one of the jewels of the state treasure.

The gate - Korea’s National Treasure No. 1 - was destroyed in an arson attack in February 2008, which shocked the country. The incident helped raise awareness of how so many of Korea’s wooden cultural properties are exposed to danger and neglect. (Sungnyemun is mostly made of wood.)

For the past five years and three months, the gate - also called Namdaemun - was put behind a gray steel fence for restoration. The Korean government spent about 27.7 billion won ($24.9 million) for what is likely one of the most high-profile restorations of cultural property in Korean history.

The government completed the restoration in May, held a large-scale ceremony and touted how it took the opportunity to transform the gate closer to the way it was during its earlier years.

After all, the gate’s form has changed many times through alterations and damages during Japanese colonization (1910-45), the Korean War (1950-53) and industrialization and city development projects between the 1970s and 1980s.

Many Koreans are concerned about media reports that in several months after the high-profile restoration more work may be needed on Sungnyemun.

Against this backdrop, the JoongAng Sunday, accompanied by experts, visited the gate on Friday to inspect in detail the state of the beloved cultural property.

We found at least 100 major cases of cracks, exfoliation and discoloring on the first and second floors. Counting the smallest cases, the number was up to 1,000.

The lotus flower drawn on the rafters in red, peach and white displayed all of those symptoms. The green in the backdrop wasn’t that different, either. Parts of the color pigments on the floor were also on the verge of being peeled off, if they haven’t already. In fact, color pigments already peeled off were blowing away.

On Oct. 8, before the parliamentary audit began, the Cultural Heritage Administration, which oversaw the restoration process, said in a press release that exfoliation has been detected in about 20 different places. But as the issue made further headlines at the parliamentary audit, some are raising the possibility that the CHA might have attempted to downplay the state of the damage in advance.

The experts that accompanied us were: Kim Ho-seok, a professor at the Korea National University of Cultural Heritage; Choi Myeong-yun, an honorary professor of cultural heritage preservation at Myongji University; and Jo Chun-ja, an artist and expert
of traditional coloring.

Upon entering, we were able to spot damages in the dancheong on the ceiling of the passage under the gate that features a blue dragon in clouds. On the wall near the staircase, white paint was dripping down. “CHA said that this is lime used in construction,” Choi said. “But this also requires further inspection.”

As we stepped into the first floor, it wasn’t hard to spot cases of cracks, exfoliation and discoloring here and there.

Particularly worse were the joints of the structure. An expert who wished to remain anonymous said that “the photos taken by the JoongAng Sunday made me think that the damage may be worse than I thought.”

In some cases, parts of the white backdrop had turned gray. “This is because they are wet,” Jo said. “It makes me concerned if there is leaking in the gate.” The situation on the second floor wasn’t that different from the first floor, although it was harder to get a close look in the dark with no light coming in.

“Dancheong will freeze in the winter and melt in spring, and once that happens there could be even more damages to it,” Choi said.

Experts agreed that the damage is likely due to the wrongful use of agyo (traditional adhesive) in color pigments, most likely the failure to control the concentration.

Hong Chang-won, the dancheong master and Korea’s Important Intangible Cultural Heritage No. 48, said “I am not an expert [of traditional adhesive], but I used the given product [from the CHA] according to the methods reported to the CHA.” He had already told reporters on Oct. 8 - when the CHA first revealed damages to the gate - that the damage appears to have occurred in the use of traditional adhesive and color pigments. 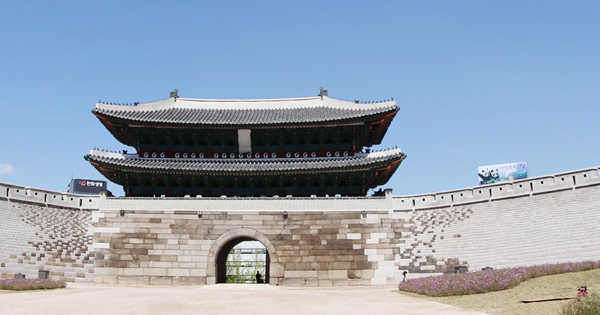 Sungnyemun, Korea’s National Treasure No. 1, was restored in May. The Korean government said the restoration helped the gate return to its original shape before alterations during the Japanese colonization. [JoongAng Ilbo]

Elaborate technique So what exactly is agyo?

Agyo is an important material used to attach traditional pigments to the surfaces of buildings. It is made of processed animal bones or skins. Its main task, in addition to sticking colors on to surfaces, is protecting the pigments’ true colors and allowing a stable outer coating.

Koreans used agyo only until the 1960s. Before then, they made agyo using cow’s skin, but after that agyo disappeared due to lack of demand with modernization and the emergence of modern building materials.

That is why the technique failed to be handed down through the generations.

Although the CHA attempted to find out the traditional production of agyo in detail, that attempt wasn’t a big success.

Once done properly, the traditional pigments are supposed to last 100 years, experts say. However, getting it right isn’t that easy.

Agyo, whose main substance is a type of protein, decays easily once it is exposed to moisture. It has to be dissolved in water only when being used. However, in such a large-scale restoration work like that for Sungnyemun, maintaining the freshness of agyo probably wasn’t easy, observers say.

One agyo expert, who talked to the JoongAng Sunday on condition of remaining anonymous, said after examining the photos we took: “It’s clear that the dancheong master hasn’t really used agyo in the past. [CHA officials and artisans] were probably able to recreate traditional adhesive to a certain degree in the lab, but things might be different in a large-scale construction site as there are many variables.”

As is the case with most newly-emerged states, the Joseon Dynasty (1392-1910) - during which Sungnyemun was built - sought to open a new era with a new ideology.

And Sungnyemun was built to show exactly that.

King Taejo (1335-1408), who founded the dynasty, sought to convey the splendor and dignity he pursued with his work on the gate.

The bluish-green color that decorates the background across the gate represents the freshness and greenness of the spring. That is why the government saw pride and the people saw hope with the construction of the gate.

With the latest incident, some are even pointing fingers over the color choice of the restored gate, saying it is too dark, somber and dull compared to what it should be.

The three experts agreed that when Sungnyemun is viewed from afar it looks so dark that hope is the last thing we see, adding that the color choice is simply wrong.

“In traditional coloring, the color must be clear and transparent in order to move people’s hearts,” Jo said.

One official at the company that provided color pigments told JoongAng Sunday that “as the color became heavier and thicker, some children even express fear toward the gate.” Park Wang-hee, a manager of CHA’s repair technique department, also said that the CHA is aware of such feedback.

“The reason the color turned out to be the way it is is because we added camellia oil to make the gate more durable to humidity. And that is according to ancient documents.”

Critics also took the opportunity to criticize the use of imported color pigments.

The Korean government praised itself upon restoration, saying how chemical pigments were used to create the colors in previous restoration works, but that the government officials and artisans sought to use traditional pigments made of stone, soil and shells in the restoration of Sungnyemun.

“It was regrettable to find out that traditional pigments were rarely produced in Korea. We had to use some traditional pigments from China and Japan for such reasons,” Hong said in a column for a government magazine. “After numerous experiments and discussions, we’ve decided to be less picky about the nation of the manufacturer and consider more about the quality of the pigments.”

Although the Korean government alleged that traditional pigments were rarely produced in Korea, experts say they can be found.

There are red pigments that come from lava on Jeju Island and Ulleung Island; bluish-green pigments that can be created from saltwater in brassware or extracted from plants; and yellow pigments from soil, pollen or gold.