Simpson picks up victory in Vegas

Simpson picks up victory in Vegas 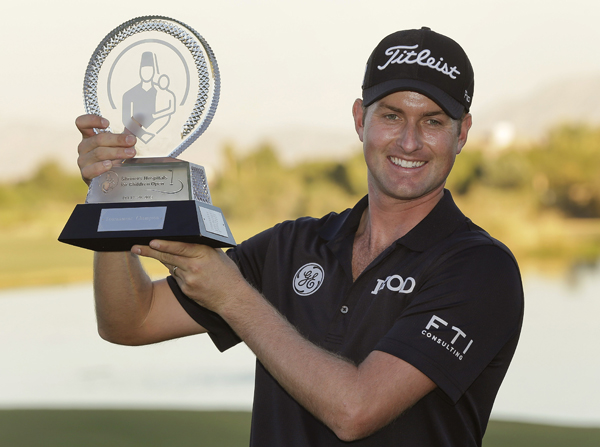 LAS VEGAS - Webb Simpson cruised to victory Sunday at TPC Summerlin, pulling away for a six-stroke win in the second event of the PGA Tour’s new wraparound season.

Winning for the first time since the 2012 U.S. Open, Simpson closed with a 5-under 66 in the Shriners Hospitals for Children Open. He finished at 24-under 260 after opening with rounds of 64, 63 and 67 to take a four-stroke lead into the final round.

“As we were going kind of middle of the round, pins were tough, greens were drying out and I knew it would take a really special round for somebody to shoot 7, 8 under,” Simpson said.

“So, I felt like I was in control, and I asked my caddie, once I hit it on the green on 17 where we stood. And I was just thankful that I was able to kind of manage my golf ball the last couple rounds.”

Simpson earned $1.08 million for his fourth PGA Tour title. In addition to the U.S. Open last year at The Olympic Club, he won the Wyndham Championship and Deutsche Bank Championship in 2011.

Ryo Ishikawa and Jason Bohn tied for second. Ishikawa, the Japanese player who had to play the Web.com Tour Finals to regain his PGA Tour card, shot a 65. Bohn had a 66.

Charley Hoffman was fourth at 17 under after a 64.

“When you get that far up the leaderboard, every putt you make is worth big dollars and big FedEx Cup points,” Hoffman said. “So, to get the year started off on the right foot, you always want to make those putts.”

Chesson Hadley, second entering the final round, had a 70 to drop into a tie for fifth at 16 under with Luke Guthrie, Troy Matteson and Charles Howell III. Guthrie and Matteson shot 64, and Howell had a 65.

Matteson had seven straight birdies - on Nos. 9 to 15 - to fall one short of the tournament record set by Jerry Kelly in 2003.

“It was a really good ball-striking round,” Matteson said. “As a matter of fact, when I got to 16, I thought I was going to get that eighth one and I ended up hitting the pin and almost going into the lake, so I would have had a tap-in there. But you know what, all in all it’s a great end to my week. I didn’t quite figure it out in the middle (of the tournament), but I certainly put it together today.” AP