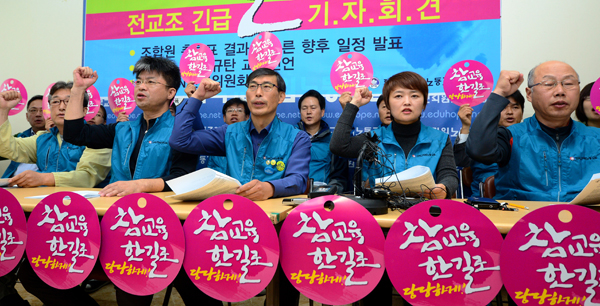 Kim Jung-hoon, president of Korea Teachers and Education Workers’ Union, third from left, chants slogans with other KTU members yesterday at union headquarters in Yeongdeungpo District, southwestern Seoul. They were protesting the government’s threat to decertify the union. [NEWSIS]

The country’s second-largest teachers union is not backing down from the government in the face of threats to have the union decertified as early as Thursday, pledging to launch a major protest campaign.

The Korea Teachers and Education Workers’ Union yesterday held a press conference at its headquarters in Yeongdeungpo District, southwestern Seoul, and vowed to fight against the government plan by waging a legal fight both at home and before the International Labor Organization.

“It is the Park Geun-hye government and the Ministry of Employment and Labor that is breaking the law by threatening to remove the KTU’s legal rights for having dismissed teachers as union members, a move that is unlawful,” said the KTU in a statement released yesterday.

Korean labor law states that dismissed workers cannot continue to be members of a union, but the KTU has refused to remove nine teachers who no longer have teaching jobs from their roles.

Earlier this year, the government ordered the left-leaning union to amend its bylaws and remove those nine teachers.

The government then set a deadline of Oct. 23, tomorrow, saying if the KTU did not make the required changed by then that it would decertify the union, taking away the legal status the progressive group has enjoyed for 14 years.

In response to the government’s ultimatum, the teachers’ group held a three-day vote from Wednesday through Friday last week on whether to accept the demand.

Of the 59,828 votes cast by union members, 68 percent objected to complying with the order while 28 percent agreed with the demand.

With the outcome of the vote, the KTU declared it will not dismiss those teachers or amend its bylaws.

Once stripped of its legal rights, the KTU will not be entitled to engage in negotiations with regional education offices to form education policies, plus it will lose financial support and other benefits from the government.

The KTU’s 77 teachers who now work full-time as union representatives will also be forced to return to their schools as regular teachers, another move the KTU refuses to comply with.

The group also said it will file an injunction to suspend the government’s orders.

Founded in 1989 as an illegal union, as the government back then banned public workers - including teachers - from participating in any type of political activities or expressing their political views, the liberal union declared its mission was to “bring democracy to classrooms.”

Over 1,500 teachers were dismissed from their teaching jobs for their participation in the group by the government in the late 1980s and early 1990s.

Most of them were later reinstated in 1994 under the Kim Young-sam government.

But the labor union would not be recognized as a legitimate organization until 1999 under the liberal Kim Dae-jung government.

The KTU is renowned for its advocacy of the basic rights of students, a stance criticized by some as too progressive and ideal, failing to recognize the reality of the Korean classroom.

The progressive union has called for an outright ban on corporal punishment by teachers and for schools to allow students basic freedoms, such as growing longer hair.

In an interview with the Korea JoongAng Daily in July, Ha Byung-su, spokesman of the KTU, said, “Because of Koreans’ obsession with college admissions, adults take for granted that students should be stripped of their rights in the name of concentrating on studying for the college entrance exam.”

The country’s second-largest teachers’ union has often found itself at the center of controversy and in the media spotlight for its outspoken stance on not only educational issues but also political issues, both domestic and international.

The KTU criticized the U.S. invasion of Iraq in 2003 and condemned Seoul’s deployment of troops there to support the invasion.