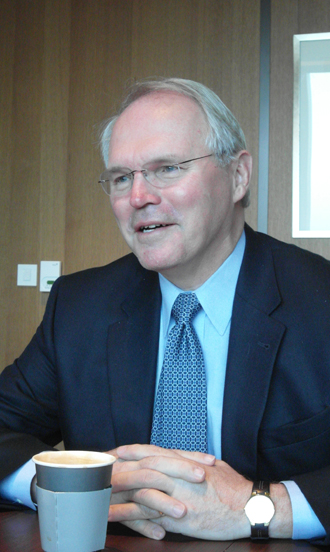 A former U.S. chief envoy to the stalled six-party talks to denuclearize North Korea has said that China may be starting “its own pivot away from North Korea” and toward South Korea.

Christopher Hill, who is currently the dean of the Josef Korbel School of International Studies at the University of Denver, said Chinese President Xi Jinping’s invitation to President Park Geun-hye to Beijing in June may signal a shift in Chinese foreign policy toward South Korea.

“China may be just beginning to have its own pivot away from North Korea and toward [South Korea],” he told the Korea JoongAng Daily in an exclusive interview on Friday at the Hotel Shilla in Seoul.

Hill, on a visit to participate in the International Conference on the Global Cooperation in the Era of Eurasia, said, “I think when the history books are written about this, [it] will be remembered … that Park Geun-hye was there [in Beijing] and Kim Jong-un stayed at home with Dennis Rodman.”

Rodman is a former U.S. basketball player who made two trips to Pyongyang this year.

Before retiring from a lifelong career in diplomacy after completing his post as an ambassador to Iraq in 2010, Hill previously served as the U.S. assistant secretary of state for East Asian and Pacific affairs from 2005 to 2009 and U.S. ambassador to Seoul from 2004 to 2005.

“I think that a good relationship is an ingredient in an eventual North Korean solution,” he said, adding that stronger Seoul-Beijing relations in no way “diminish” the U.S.-South Korea alliance.

“I do believe that the issue of denuclearization of North Korea is also an issue of engaging China and creating kind of a pattern of conversation with China,” Hill said, adding that it is “very appropriate” to have China as chair of the long-stalled six-way dialogues.

He warned, however, that China would be keen to avoid the collapse of the Kim regime.

Looking back on his time as chief envoy to the talks, Hill said that the negotiations had been a success.

Hill said the joint statement released by the six-party talks back in September 2005 - in which North Korea agreed to abandon its nuclear weapons program and return to the nuclear nonproliferation treaty - was still relevant despite the fact that North Korea walked away from the talks in 2008.

Hill said, “[… The statement] contains all of the elements for not only a solution to the North, but [also for the] Northeast Asia region to realize its potential.

“By the way, I offered to the North Koreans immediate establishment of interest sections in Washington and Pyongyang - they rejected that,” he recalled regarding his negotiations with the North following the six-party joint statement.

“We were prepared to work with North Koreans on a sequencing that is consistent with the step-by-step, action-for-action approach of the six-party talks … They didn’t seem to want to have American diplomats in Pyongyang.”

Hill reflected on his experience here as ambassador during the Roh Moo-hyun administration, which was generally perceived to be anti-American. “I came to Seoul at a time when I think the U.S.-Korea relationship was out of sync,” he said.

Hill was the first U.S. ambassador to visit the May 18th National Cemetery in Gwangju, commemorating the Gwangju Democratization Movement in May 1980 under the Chun Doo Hwan military regime that led to the massacre of hundreds of civilians, which he said he considered his most memorable experience here as the cemetery is “a symbol of Korean democracy.”

“I also wanted to put to rest this notion of ‘big brother, little brother,’ which I think was a great burden to the relationship at the time,” he said. “Finally, I wanted to find a common language between our administration under [former President] George W. Bush and the Korean administration under Roh Moo-hyun that was not so easy at first, but I felt that we made that relationship work.”

“The first 60 years have not been a honeymoon,” he admitted; however, “I have a perspective on the ROK-U.S. relationship and that perspective convinces me that it is just about the best one we have in the world.”