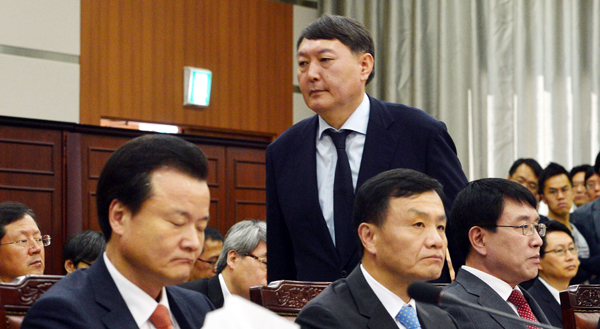 Yun Seok-yeol, the senior prosecutor who led a probe into the alleged online smear campaign of the NIS against an opposition party presidential candidate, walks behind Jo Yeong-gon, right, the head of the Seoul District Prosecutors’ Office, yesterday after Yun testified at a Legislation and Judiciary Committee hearing. [NEWSIS]

The senior prosecutor in charge of a probe into the National Intelligence Service’s alleged interference in the 2012 presidential election protested his recent dismissal from his appointment and argued that there was “pressure” on his investigation from the start.

Yun Seok-yeol, the head of the Suwon Prosecutors’ Office’s branch in Yeoju, attended a hearing at the parliamentary audit on the prosecution yesterday to testify on the Twitter comments supposedly posted by national spy agency officials ahead of the election.

The Democratic Party and the prosecution on Sunday accused National Intelligence Service agents of posting a total of 55,689 Twitter messages during the preliminary stages of the presidential race last year that disparaged Democratic candidate Moon Jae-in and independent candidate Ahn Cheol-soo.

The tweet campaign continued during the full campaign period.

Whether the National Intelligence Service attempted to manipulate public opinion by posting online comments has become the hottest issue in the legislature during the annual inspection of the Park Geun-hye administration, dominating other important state affairs.

Yun was dismissed from leading the probe on Thursday, one day after he ordered his investigators to raid the houses of four NIS officials, which resulted in the arrest of three of them. The prosecution said Yun was dismissed because he failed to properly notify his superiors of his plans for the arrests.

Although Yun had an arrest warrant issued by a local court on Oct. 16, he apparently should have reported his arrest plan in advance to his superiors, the justice minister and the head of the Supreme Prosecutors’ Office.

Under the current law, arrests of spy agency officials require that additional step, which Yun did not take.

However, Yun claimed at the hearing yesterday that he did follow appropriate internal steps, alerting his superior, Cho Young-kon, the head of the Seoul District Prosecutors’ Office, of his plans.

“On Oct. 15, I visited [Cho ’s house],” Yun said during his testimony. “I brought my report on the investigation and briefed [him on my plans].”

Cho , who also testified at the hearing, denied that it was an official notification and claimed Yun authorized the arrests himself.

“We just had a casual, private conversation,” Cho said. “It was not an official notification. We were just having dinner, [and then] Yun suddenly showed me his report. I just told him to ‘review’ the report and returned it.”

Yun went on to say that his investigation was under pressure from the beginning.

“At the beginning of this investigation, I had [a lot of] trouble because of external pressure,” Yun refuted, without mentioning the parties responsible.

“I was also ordered to release the NIS officials and return their belongings that we confiscated.”

When lawmakers asked whether Justice Minister Hwang Kyo-an was one of the people who exerted pressure on his investigation, Yun replied, “I think he was.”

Yun also argued that Cho dissuaded him from arresting the NIS officials because he was afraid of being criticized by the ruling party.

“Cho told me that ‘if you do this, I will be criticized, because it [the arrest] would help the opposition,’” Yun said. “He also said, ‘if you really want this [the arrest], do it after I resign.’”

Cho said that Yun’s actions were ultimately an act of “an insubordination.”

“The prosecution is not an organization for only one person,” Cho said. “Everything should go through the right procedures. But his report did not follow proper procedures.

“I thought Yun was a diligent, talented prosecutor,” Cho said. “I have never thought that he would act like this.”

The incident is also the latest in a series of allegations that the spy agency meddled in the election.

In June, former NIS chief Won Sei-hoon was indicted on an Election Law violation, as well as breach of the agency’s internal code of conduct, which requires political neutrality for all of its members. Won apparently ordered his subordinates to post a total of 1,970 comments on Internet portal sites and other online forums.

On Oct. 18, Yun submitted a revised application for a trial for the former NIS chief that included the accusations about the Twitter messages. The Seoul Central District Court said it would decide whether to accept the revised application on Oct. 30.

The ruling party members have complained that the DP was focusing too much on a political fight against the Park Geun-hye administration rather than state affairs during the inspection.

In particular, the Saenuri Party criticized the DP for restarting its outdoor protest at Seoul Plaza on Saturday, using the same slogan: “Restore democracy, reform the NIS.”

“They are doing politics with no principles, still suffering from the illusion of [overturning the outcome] of presidential election, even 10 months later,” said Representative Yoo Ki-june, a supreme councilor of Saenuri.

“We have [been continually hovering] over the issue of the presidential election,” Saenuri Chairman Hwang Woo-yea, said. “We can’t do this anymore. We should move on to the politics for state affairs.”