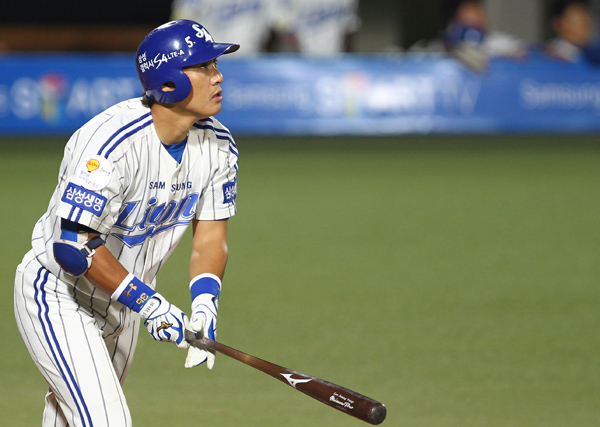 Analysts say slugger Lee Seung-yeop of the Samsung Lions needs to be back in shape if the team is to win its third straight Korean Series title. By Kim Min-gyu

As the Korean Series gets under way tomorrow between the Samsung Lions and the Doosan Bears, analysts are split over who will become the champion of the 2013 Korea Baseball Organization (KBO) season.

When Ilgan Sports asked 10 baseball analysts to pick the winner of the best-of-seven series, five of them predicted that the defending champion, the Lions, will overpower the Bears, 4-2, while two of them thought that the Bears will win. The other three said the outcome is too close to call.

However, those who picked the Lions said the team’s veteran slugger, Lee Seung-yeop, 36, needs to perform better than he did in the regular season. At the end of the season, Lee was excluded from manager Ryu Joong-il’s roster due to a back injury. He rehabbed for about a month and seems to be ready to play. Ryu is considering having Lee bat sixth in the lineup.

But because Lee and Chae will be platooned at designated hitter and first base, Choi, who can play either DH or left field, will only play in left field despite his poor fielding ability. It means that the Lions can’t start outfielder Jung Hyung-sik, who has the best speed and fielding ability as a center fielder. Bae Young-seob will likely play center field while veteran Park Han-yi and Choi share the corners.

Because the Nexen Heroes and LG Twins lost to the Bears with poor defense in previous rounds, some analysts insist that manager Ryu should start Jung while utilizing Lee as a pinch-hitter, just like Bears’ manager Kim Jin-wook did with his slugger, Choi Jun-suk, who hit three home runs in the postseason. Choi hit two home runs as a pinch-hitter.

“Solid defense is the key to win games in the postseason when we look at the first- and second-round games,” analyst Ma Hae-young said. “The Bears led the league in batting, but the reason they beat the Heroes and the Twins was defense.”

But it seems like manager Ryu doesn’t want to give up the league’s best bat. “Having Lee in the lineup puts huge pressure on opponents’ pitchers,” Ryu said.

In the postseason, the Bears expected their batters to lead, but the pitchers have done a better job. Manager Kim said their top three starters, Dustin Nippert, lefty Yoo Hee-gwan, the MVP of the second round, and No Kyung-eun are good enough to compete with the Lions’ top three starters; lefty ace Jang Won-sam, and right-handers Bae Young-soo and Yoon Sung-hwan, but Kim said their best hitter, Kim Hyun-soo, should hit better in the series. Kim was hitless in Game 3 and Game 4 in the second round against the Twins.

“If we exclude Kim from the lineup, the defense gets better, but we need a big bat to compete with the Lions’ strong arms,” manager Kim said.