Robust won has exporters on edge

Robust won has exporters on edge

As the won continues to strengthen against the U.S. dollar, exporters’ concerns are rising.

The Korean won yesterday further appreciated to close at 1,060.95 won against the U.S. greenback after losing 1.25 won from the previous day.

Many exporters in Korea consider 1,050 to be their break-even point.

Although large exporters such as Samsung Electronics and Hyundai Motor Group have been building up their immunity against currency exchange risks by employing various hedging methods, smaller exporters remain vulnerable to unexpected changes in the market.

The won has been strengthening to the level seen at the beginning of the year, particularly with 38 straight days of foreign investment inflows into the local stock market.

Additionally, the ongoing current-account surplus has contributed to the muscle of the Korean currency. A recent report by the Bank of Korea shows that surplus will continue through this month. If so, it would be the 21st consecutive surplus month.

Unlike in the past, when foreign investors sold stocks when the won hit the 1,060 mark to profit from the appreciation, market experts say the buying spree will likely continue for the time being. 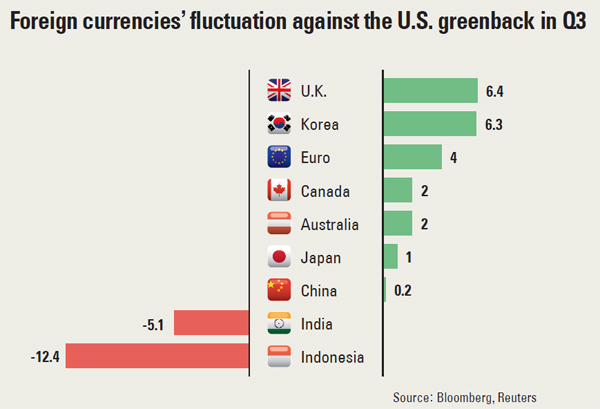 “Under the past pattern, the 1,600 won is in the profit-seeking range,” said Shim Jae-yeop, an analyst at Shinhan Investment and Securities. “But this month, foreign investors have been further increasing their net purchase of local stocks. It seems as though instead of profiting from the recent appreciation of the won, foreign investors are making a long-term investment, betting on Korea’s economic fundamentals.”

Another analyst noted that foreign investors are continuing their buying of Korean stocks as the market here has been relatively stable compared to other emerging markets in Asia.

The won started off at 1,071.1 against the dollar yesterday and quickly strengthened to the 1,050 level.

According to the Bank of Korea report on Monday, the won had the second-highest appreciation against the dollar in the third quarter among the Group of 20 economies.

From July through September, the Korean won appreciated 6.3 percent against the U.S. dollar, just short of the 6.4 percent of the British pound. The Japanese yen appreciated 1.4 percent, and the Chinese renminbi 0.2 percent.

During the same period, the Indian rupee weakened 5.1 percent against the dollar, and Indonesia’s currency depreciated 12.4 percent as foreign investors pulled out on concerns over the U.S. Fed possibly tapering its bond-purchasing program.

At the same time, the profitability of exporters is expected to fall. The BOK report showed that export prices were down 4.6 percent year-on-year and 2.4 percent month-on-month.

“The average won-dollar exchange in September appreciated 29.63 won compared to 1,116.98 won in August, which drove export prices down,” said a BOK official.

While the won appreciation is expected to hurt local exporters, continued weakening of the Japanese yen continues to have an impact on Korea’s exports nearly a year after the Shinzo Abe administration artificially lowered the currency’s value to stimulate its economy, a report said.

According to the Institute for International Trade (IIT) under the Korea International Trade Association (KITA) yesterday, Korea’s exports to Japan have significantly declined for the past seven months, affecting flagship export segments like petrochemicals and steelmaking.

From February through August, exports fell by more than 10 percentage points year-on-year.

It is the longest decline since November 2008, when the country was hit by the U.S.-triggered global financial crisis.

Japan’s share of Korea’s total exports was about 7.7 percent early this year, but that has dropped to 5 percent, the report said.

“Increases in Japan’s exports can be interpreted, vice versa, as declines in our exports, since the two countries have many overlapping export items,” said Oh Se-hwan, a research fellow at KITA’s IIT .

Japan’s exports surged 12 percent in July and about 15 percent in August. In August, the yen-to-dollar exchange rate soared 24.3 percent year-on-year, fueling the rise.

“From now on, Korea could see a bigger impact on its exports as competition with Japanese exporters in some industrial sectors is expected to grow fiercer in overseas markets,” Oh said. “Exports of automobiles, semiconductors and petrochemicals could be hit hard.”

According to the institute, 55 of the country’s top 100 export items overlap with those of Japan’s.