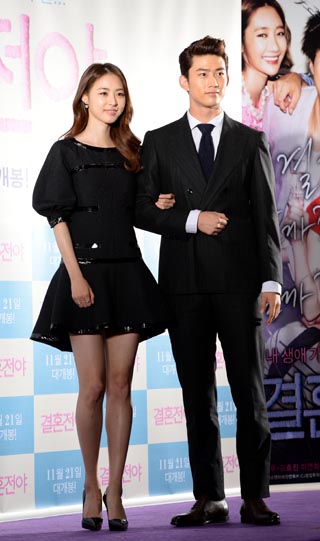 The cast members of coming movie “Marriage Blue” gathered at a press conference yesterday at the Megabox Theater in COEX, southern Seoul, to promote their new film.

The romantic comedy tells the story of an engaged couple who experience last-minute jitters and cold feet just a week before their wedding ceremony.

Actress Lee Yeon-hee and singer Ok Taecyeon of the boy group 2PM play the couple in trouble in the movie that will be released on Nov. 21.

During the press conference, Lee said that she would be happy to receive a wedding proposal near the Han River at night, although she hadn’t put much thought into the idea.

When Ok was asked if he would marry a girlfriend of seven years, just like the character he plays in the movie, he said yes after a large pause, leading the audience at the conference to think otherwise.