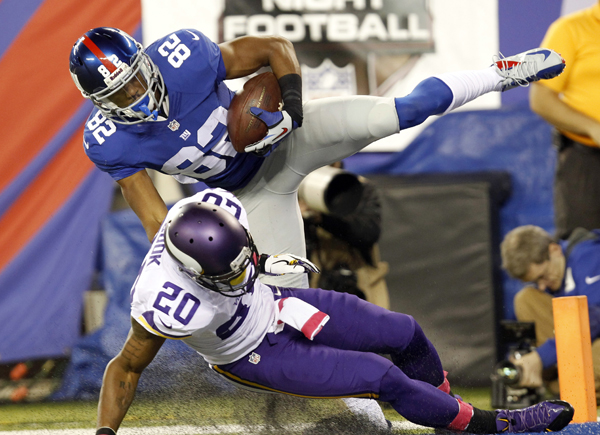 The New York Giants ended their worst start to a season in almost 40 years with a 23-7 triumph over the Minnesota Vikings on Monday.

Eli Manning avoided throwing an interception for the first time this season, and the Giants (1-6) got a spark from recently signed running back Peyton Hillis to ruin Josh Freeman’s debut as the Minnesota quarterback.

New York’s 0-6 start was their worst since losing their opening nine games in 1976.

“We played smart,” Manning said. “Offensively, not turning the ball over and the defense played outstanding. It’s a start, we’ll go from here.”

Manning threw a 24-yard touchdown to Rueben Randle in the second quarter to give the Giants a 10-7 lead after Minnesota had taken a 7-3 edge in the first quarter when Marcus Sherels returned a punt 86 yards for a touchdown.

It was the first time New York led at halftime all season.

Hillis, who was acquired last week and thrust into action because of injury concerns amongst the Giants’ running backs, scored on a 1-yard run that stretched the advantage to 17-7 in the third quarter.

Hillis finished with 36 yards rushing and 45 yards receiving in his first game of the season.

Freeman, who was released from the Tampa Bay Buccaneers and signed by the Vikings (1-5) earlier this month, completed 20 of 53 passes for 190 yards and an interception.