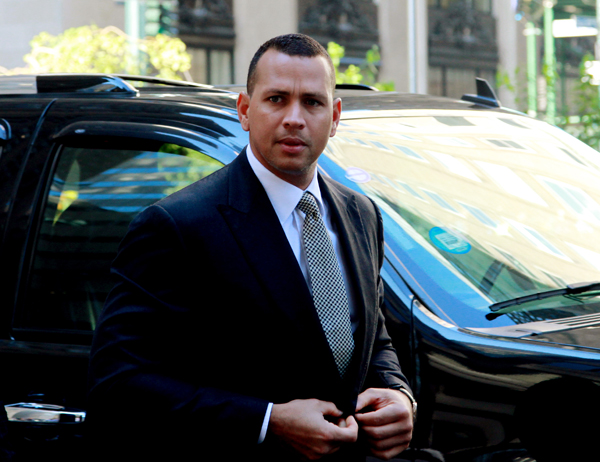 NEW YORK - Blocked from holding a news conference Monday to present a person they described as a “major league baseball whistle-blower,” Alex Rodriguez’s lawyers asked that the rest of the grievance hearing to overturn his 211-game drug suspension be opened to the public.

Rodriguez’ legal team called a 5 p.m. news conference at a Manhattan office of one of the law firms representing the New York Yankees third baseman. More than an hour later, lawyer James McCarroll said arbitrator Fredric Horowitz issued an order restraining them from “conducting any press conference or briefing regarding the subject matter of the hearing.”

McCarroll was joined by Jordan Siev, a partner at Reed Smith, a firm used by A-Rod pal Jay-Z; Joseph Tacopina, who appears to have become A-Rod’s lead lawyer in the case; and Lanny Davis, special counsel to President Bill Clinton during his White House years. Davis was retained to give Rodriguez legal and media team advice on due process and fairness issues.

The lawyers would not say whether the “whistle-blower” worked for Major League Baseball, one of its teams or some other affiliate. Rodriguez’s attorneys repeatedly have complained about MLB’s investigation, describing it in a lawsuit as a “witch hunt” and alleging MLB paid for information and intimidated witnesses. Both sides have accused each other of leaking confidential information. MLB has denied any improprieties.

“We had a 100-plus page presentation prepared walking through a great deal of misconduct that did not relate directly to the substance of the arbitration,” McCarroll said.

One person familiar with the day’s developments, speaking on condition of anonymity because no additional statements had been authorized, said an MLB employee had written to Rodriguez’s lawyers expressing unhappiness with MLB’s investigation methods.

“We think the arbitrator issued an appropriate ruling consistent with the confidentiality provisions of the basic agreement,” MLB spokesman Pat Courtney said. “The fact that they canceled the briefing shows that we were right in asking that they stop publicly commenting about this matter while we are in the midst of an arbitration hearing.”

Rodriguez was suspended for 211 games in August after baseball’s investigation of the now-closed Biogenesis of America anti-aging clinic. The players’ union filed a grievance to overturn the penalty, and the three-time AL MVP was allowed to play until the grievance is decided.

Tacopina called for MLB and the players’ association to open the hearings to the public and release transcripts of the eight days of sessions thus far. As a private arbitration procedure, MLB and the union have not made their hearings public, although sometimes arbitrator’s decisions have been released.

The case technically will be decided by a three-person panel that includes MLB chief operating officer Rob Manfred, who cast the second vote to block the news conference, and union general counsel Dave Prouty.

Hearings are scheduled to resume the week of Nov. 18, and Tacopina said it was unclear whether the sides could finish taking testimony that week.