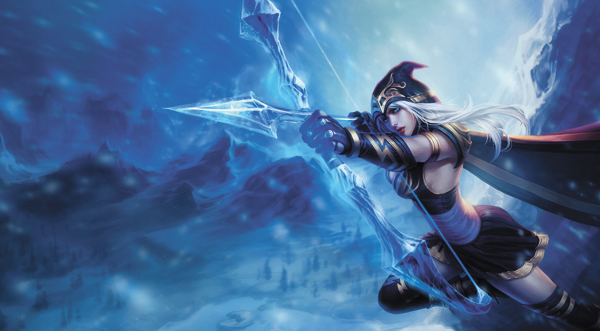 Ashe is a character of the popular “League of Legends” game, developed in the U.S. and sold to a Chinese company in 2011. Provided by the company

In May, Netmarble, a local game portal Web site, pulled the plug on its business of running the RADA Studio that was established last year to develop massively multiplayer online role-playing games (MMORPG). The decision was made five months after the corporation was founded by Netmarble to dedicate itself to developing online games. Back then, the game company said, “It takes too long to develop online games and the costs are rising.”

Blueside, one of the first-generation game developers, had been working on its “Kingdom Under Fire II,” a sequel to its real-time simulation game that sold more than 2 million units worldwide, for five years as of this year. The work schedule is being delayed because of a shortage of funds.

“It’s not just Blueside,” said an industry official. “The domestic game industry overall is in crisis.”

Although the game industry was chosen by President Park Geun-hye after her inauguration as one of the five global killer content sectors that would help boost her creative economy initiative, the industry itself is at risk. The other four are the publishing, broadcast, animation, music and film fields, but the game industry represents about 80 percent of Korea’s content-related exports.

Industry insiders note that excessive regulation in the game industry is discouraging companies from developing and launching new products.

“Unlike Korea, Chinese game companies including Tencent Holdings, are launching several hundred games,” said an executive at a game company. “If this continues, the time will come when Chinese companies take away Korean companies’ positions in the industry that includes not only online games, but mobile games.”

In recent years, the National Assembly has been pouring out bills that regulate the game industry in general. Earlier this year, there were two proposed bills to prevent Internet game addiction and support the cure of addicts. They suggested expanding the shutdown system and requiring game companies to contribute 1 percent of their sales to a fund to treat people hooked on online games. The contribution percentage is more than three times the 0.35 percent that the horse racing and gambling businesses pay. 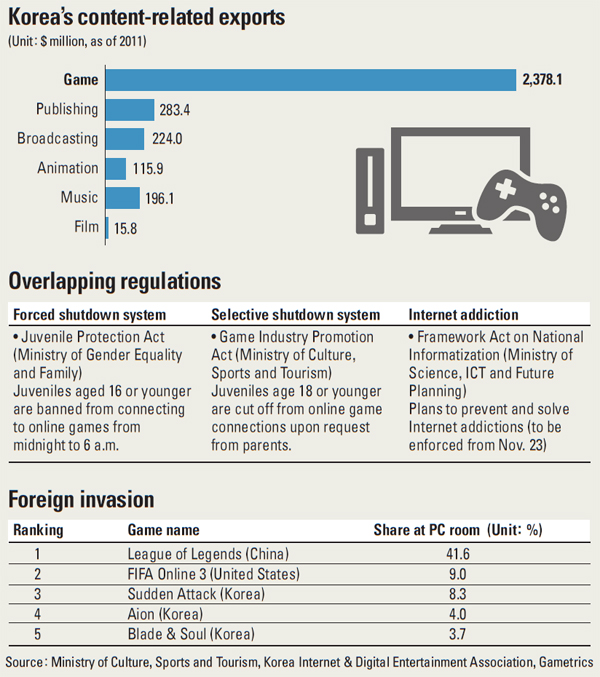 Also, in a bill proposed in April by a ruling Saenuri Party lawmaker, online games would be categorized as one of four addictions, along with drugs, gambling and alcohol.

Industry regulations are being pinpointed as the main cause for the increasing cost of developing games.

According to the Korea Internet and Digital Entertainment Association, game companies are required to spend 1 billion won to 2 billion won ($942,504 to $1.9 million) more on each game they develop to comply with the forced and selective shutdown systems that have been enforced since 2011. The forced shutdown system prevents gamers under the age of 16 from playing online between midnight and 6 a.m., while the selective shutdown system allows juveniles aged 18 or younger to be cut off from online game connections at the request of their parents.

If the bills proposed this year become law, game companies will face a heavier financial burden during development. The number of newly-released games in Korea have already dropped almost 50 percent, from 2,857 in 2011 to 1,444 in 2012.

“The cost needed to launch a new game is too much for game developers to bear,” said an industry official.

What’s more, many domestic game developers have been sold to Chinese companies or are receiving investments from them. Tencent is known to have invested in shares worth 4 billion won in a local game developer called NSE Entertainment. Also, Shanda Games acquired Korea’s Actoz Soft, developer of “The Legend of Mir,” and Eyedentity Games, which developed “Dragon Nest.”

Figures show that gamers at Korean PC rooms are turning to foreign games.

In 2011, 52 percent of total hours at PC rooms by gamers were spent playing local games, according to the Game Rating Board. Now, only 27 percent are. The game “League of Legends,” which has been popular since last year, was developed by United States-based Riot Games and is operated by Tencent.

“Korea’s game industry that has been the foundation of the country’s content exports is being pushed by Chinese companies that receive lots of support from their government,” said Kim Sung-gon, director at the Korea Internet and Digital Entertainment Association. “The jobs of around 95,000 people in the game industry are at risk because of regulations pushed by the government and political circle.”