Diplomatic Academy looks to the future, celebrates its past

Diplomatic Academy looks to the future, celebrates its past 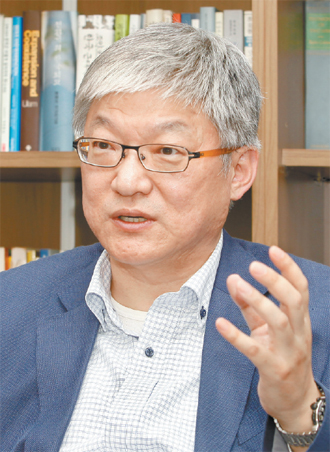 The Korea National Diplomatic Academy (KNDA) held its 50th anniversary celebration last month and its greatest accomplishment, said the head of the academy, is its transition into a new system of training and selecting Korean diplomats.

“The new system starting in December will be different from the old foreign service exam in that we used to select first and then train diplomats, whereas now the format is that we will train and then select diplomats,” said the 54-year-old chancellor of the academy, Yun Duk-min, as he sat for an interview with the Korea JoongAng Daily in his office in Seocho District, southern Seoul, on Oct. 2.

In March 2013, the academy was expanded and reorganized as the present day KNDA in order to upgrade Korea’s diplomatic workforce and abolish the old government-administered foreign service exam.

The 47th class closed its doors on the rote-based old High Diplomatic Service Examination system this year and replaced it with the new one-year trimester training system. He said that the academy is at its final stage of selecting candidates for its first class of diplomats under this new system, the interviews. Forty-five people will be selected to train at the KNDA, of which 40 will become level 5 government officials next December.

“If before we selected students with similar backgrounds, now we are preparing to choose diverse students of very different specifications,” said Yun, “with expertise in certain regions or special areas like international law or development cooperation.”

An expert on North Korea and Northeast Asian security issues, Yun, who served as a professor of international relations at the KDNA, was tapped as new chancellor of the academy in April.

The formula is to have specialty diplomats who have one region of expertise, one specialty area and knowledge of two languages. Yun added that trainees should be able to “speak well, write well and negotiate well” and have “a sense of mission.”

Yun is a graduate of the Hankuk University of Foreign Studies. He received a master’s degree from the University of Wisconsin-Madison and a doctorate in international relations from Keio University.

Q. This year, the 47th class, marks the last year of diplomats picked through the old diplomatic service exam system. What kind of changes can we expect?

A. Through the diplomatic service exam system, top elites were trained and produced in a short period of time. But as Korean’s international status has become much more elevated and globalized and diplomacy has become very specialized and diverse, while regular generalists are important as well, there is a need for those with other specialties and talents as well. This is an era where diplomacy is not just about meeting your counterpart high-level officials, but that of public diplomacy, where civilians are talking to each other. We have in the past 50 years tried to promote fairness through exam grades, which is a successful model but that of the past .?.?.

Countries across the world attach importance to and want to work with Korea ... We would also like to help train foreign diplomats who specialize in Korea, learning side-by-side with the Korean diplomats [60 percent of classes are taught in English] and also promote networking opportunities through long-term programs.

Has diplomacy of the 21st century also shifted to traditional diplomacy?

The best example of this is with the U.S. If you recall in 2002, there were huge anti-American demonstrations [following U.S. soldiers hitting and killing two middle-school girls in an armored vehicle] and the public opinion of the U.S was very low. In public opinion polls, the U.S. was named Korea’s No. 1 enemy country then. In contrast, a decade later, a variety of public opinion polls, regardless of liberal or conservative media, uniformly show that about 75 percent say the U.S. is Korea’s closest country. What is the difference in 10 years? U.S. diplomacy has changed and public diplomacy has changed. If you remember, U.S. Ambassador Kathleen Stevens used to ride bikes and meet people, or Ambassador Sung Kim speaks Korean and is seen eating ddeokbokki (spicy rice cakes) in Sinchon with his family. Likewise, U.S. ambassadors across the world can be seen completely adjusted to the country, interacting with the locals and networking. This prospect is something our diplomats also have to work on - adapting to the country and speaking the language.

Korea and the U.S. celebrated its 60th anniversary of mutual security alliance this month. What is the significance of this alliance?

The United States has alliances with many countries, but it will be difficult to find an alliance as successful as that with Korea .?.?. The Korea-U.S. relationship has advanced into a very important linchpin. You can say that a linchpin is the highest level of relations, higher than a cornerstone. At the Korea-U.S. summit [in May], it helped that President Park Geun-hye did a good job with her speech at the Congress. Over five years of the [Barack] Obama administration, six countries’ leaders spoke at the U.S. Congress. The prime ministers and presidents of Israel, Germany, the U.K., Mexico, and the remaining two times were Korean presidents. That shows how highly the U.S. regards Korea .?.?. We have come this far as allies that share the values of freedom and democracy and successfully put into effect a bilateral free trade agreement. And surprisingly, there is also a level of rivalry, like with Apple and Samsung. The Korea-U.S. relationship has surpassed that of a protector and protectorate into one of equal standing, which is especially significant to the U.S. as China expands.

How do you perceive the tense relations between Japan and Korea?

It’s a regretful situation that the Korea-Japan relationship is facing such difficulties. Japan and Korea have shared values such as democracy and market economy, and both have alliances with the U.S. We are also very closely linked, almost inseparably, in terms of the two countries’ economic or civilian relations or security. We need to take into consideration that the normalization of our two countries relations in 1965 amid a lot of civilian protest. The biggest reason why such normalization of relations was possible was because Japan showed that it was willing to walk a different path than that of the past. And whenever Japanese and Korean relations worsened, Japan has confirmed that sort of image, for example through the Murayama Statement [of 1995], Prime Minister Keizo Obuchi and President Kim Dae-jung’s joint declaration [of 1998] or the Kono Statement [of 1993], or Prime Minister Naoto Kan’s apology [in 2010], ascertaining that Japan has advanced from its past wartime image to a peaceful Japan, walking a completely different path. While Korea-Japan relations are difficult, through such acts as a foundation, our politicians and people have built up cooperation. But the problem now is that the very foundation of the Korea-Japan diplomacy built since 1965 is shaking. If the foundation crumbles, it is very difficult to rebuild it.

How does the North Korea issue affect our image to the international community?

Our relationship with North Korea is two-sided. On one hand, they are our enemy, and are always thinking to conquer the South.

But on the other hand, they are also our compatriots that we need to unify with. How we deal with the North Korean problem is one of our soft power tasks, and the international community will be watching how we handle the process to make a denuclearized Korean Peninsula and unify it.

What is your greatest goal as chancellor of KDNA?

My No. 1 goal is that the trainees that graduate in December next year are shown to be different from the diplomats we’ve trained thus far, nothing more, nothing less .?.?. In the next several years, we want to develop into a great global think tank in diplomacy.