Prosecutor asks to be scrutinized

Prosecutor asks to be scrutinized 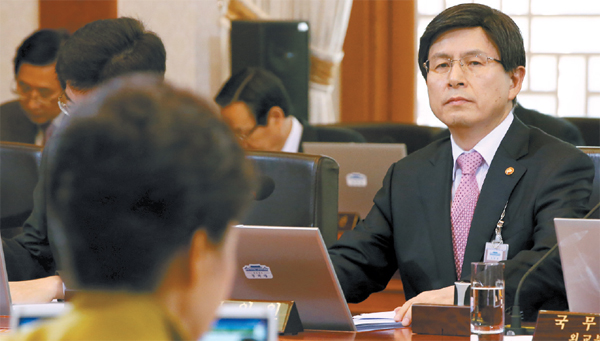 Justice Minister Hwang Kyo-an, right, looks at President Park Geun-hye yesterday at a cabinet meeting in the Blue House. Park did not say anything about the prosecution’s fracas during the cabinet meeting. [Joint Press Corps]

Denying allegations that “external pressure” was applied on an investigation into whether the country’s spy agency played dirty tricks in last year’s presidential campaign, a Seoul prosecutors’ office head requested a probe into himself to prove he didn’t play a part.

It is unprecedented for a prosecutor to request an internal inspection into himself.

Cho Young-Kon, head of the Seoul Central District Prosecutors’ Office, yesterday submitted a request to the Supreme Prosecutors’ Office to investigate him after a junior prosecutor who worked for him dropped the bombshell revelation about the investigation of the National Intelligence Service’s alleged online smear campaign against the losing candidate in last December’s election.

At a parliamentary hearing Monday, Yun Seok-yeol, a senior prosecutor in the Suwon District Prosecutors’ Office’s Yeoju branch, told lawmakers that there was “external pressure” when he was leading a special probe into the NIS case.

Following Cho’s request, Kil Tae-ki, the acting prosecutor-general, has ordered investigators to launch an internal inspection into whether Yun was indeed under pressure.

Yun was dismissed as leader of the probe on Friday, a day after he ordered raids of the residences of four NIS officials, and the arrest of three of them without the authorization of his superiors.

According to the Act on the Staff of National Intelligence Service, prosecutors or police can’t arrest an NIS agent, even with an arrest warrant. They must notify the NIS chief in advance of plans to arrest an agent.

Under the hierarchy of Korea’s prosecution, Yun should have discussed his arrest plan with Cho first, who would have alerted the Supreme Prosecutors’ Office and the Ministry of Justice before they reported it to the NIS chief.

Yun argued at the hearing on Monday that he reported his arrest plan to Cho on Tuesday during a dinner at Cho’s house. Yun said Cho “was upset” over his plan, saying “If you really want to do that, do it after I resign. The opposition party [Democratic Party] would definitely use this for their political gain.” 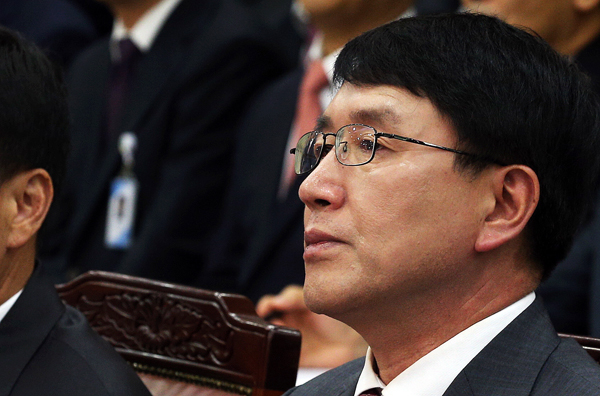 He also said he felt “external pressure” when he was leading the special probe. Yun said he thought Justice Minister Hwang Kyo-an was one of the people who exerted pressure.

According to Yun, former NIS chief Won Sei-hoon allegedly ordered his “psychological warfare team” to wage a campaign against presidential candidate Moon Jae-in via Twitter, tweeting a total of 55,689 negative comments ahead of the 2012 presidential race.

In June, former NIS chief Won Sei-hoon was indicted for violating the Election Law as well as breach of the agency’s internal code of conduct, which requires political neutrality for all of its members. Won allegedly ordered his subordinates to post a total of 1,970 comments on Internet portal sites and other online forums.

On Friday, Yun submitted a revised indictment for the former NIS chief’s trial to include the accusations about the Twitter campaign. The Seoul Central District Court said it would decide whether to accept the revised indictment on Oct. 30.

Cho denied all allegations by Yun, saying he showed him his report at the time of their dinner but returned it and told Yun to “review” the matter.

At the hearing Monday, Cho said: “I trusted Yun Seok-yeol and I decided I would never turn my back on Yun Seok-yeol. But I never imagined that he would act like this, insubordination.” At the end of his testimony, Cho was weeping.

“The hierarchy of the prosecution has entirely collapsed,” Kweon Seong-dong, a senior member of the party, said in a radio interview yesterday. “As a prosecutor-turned-politician, I feel terrible seeing the prosecution crumble into dust.”

“We fully understand the intention of Cho’s request for a probe into himself,” Kim Tae-heum, a spokesman of the Saenuri Party, said in a statement yesterday. “He must have felt miserable to see Yun, who was under his control, distorting the truth.”

The Democratic Party, which has championed the allegation about the NIS’s campaign meddling, is encouraging public protests against President Park Geun-hye’s legitimacy.

It resumed its ongoing protest rally at Seoul Plaza, calling for reform of the NIS on Saturday.

The Saenuri Party has condemned the DP for obsessing over the election issue, ignoring other government affairs.

“All of the people responsible for exerting pressure on the special probe team should resign, including the justice minister, the NIS chief and the head of the Seoul Central District Prosecutors’ Office,” DP head Kim Han-gill, said at an emergency party meeting he convened yesterday.

“We also need an apology from the president.”

“This was absolutely a rigged election,” Park Jie-won, a senior member of the opposition party, said at the meeting. “It is time for us to seriously think about the matter of last year’s election.”

Park also said via Twitter that Cho’s request for a probe into himself is “a show to seek exoneration.”

The shocking revelations by Yun on Monday came as a surprise to the prosecution.

“I feel really sorry that this scandal has arisen for all the people to see,” a junior-level prosecutor told the JoongAng Ilbo yesterday.

But some prosecutors said the conflict was a fundamental one in the prosecution.

“When an issue is politically sensitive, the leader of an investigation always clashes with a high-ranking prosecutor who cares about its political impact,” a senior prosecutor told the JoongAng Ilbo.