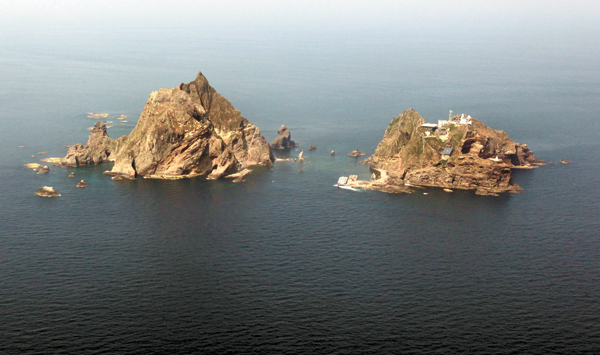 Korea has launched a series of cultural events in honor of Dokdo Day on Oct. 25 in a bid to spread awareness about the history surrounding the group of islets in the East Sea and Korea’s claim to them.

Festivities kick off Friday at 3:30 p.m., with seven cities across the nation - including Seoul, Busan, Daegu and Gwangju - holding flash mob performances that will feature the song “Dokdo Is Our Territory.”

And on Tuesday, Dokdo will play host to a Juggernaut Battle, or Chajeon Nori - a traditional Korean game that originated in the Andong region and resembles a jousting match.

This is a markedly different, and softer, approach than in past years to promote Korea’s claim to Dokdo. Previous efforts, intended to appeal to a wider, international audience, included a string of patriotic advertisements and the issuance of commemorative stamps.

“It is important to [hold events] that foreigners can watch and be interested in on Dokdo,” said Choi Jong-won, director of the environment and marine affairs bureau of North Gyeongsang provincial government. This “is a quiet but effective policy to preserve Dokdo.”

Seoul’s official position is that Dokdo is Korean territory - historically, geographically and under international law - and that there is no territorial dispute over it.

Japan also lays claim to the islets, which it calls Takeshima, and considers them to be part of Okinoshima, Oki District, Shimane Prefecture.

Despite some calls within the country to be more vocal on the issue, softer tactics seem to have proved more effective in attracting tourists and Koreans to Dokdo.

The Korea Cup International Yacht Race in May saw 300 contestants from 10 countries, including the United States and China, depart from Hupo Port in Uljin County, North Gyeongsang, and finish on Dokdo.

The competition was made into a 45-minute documentary and will be aired on top U.S. broadcast stations through December.

“The beauty of Dokdo is indescribable,” Michael Everson, an American competitor, was quoted as saying.

The documentary was produced by New York-based sports marketing company ISEA Communication, which is managed by Korean-American Cho Hyun-joon. “The objective is to spread awareness of Dokdo through a sport like yachting,” Cho said, adding that he hopes the documentary will draw a wide audience.

Oct. 25 was declared as Dokdo Day by various civic organizations in 2010, including the Korean Federation of Teachers’ Associations, to celebrate when Emperor Gojong of the Korean Empire announced jurisdiction over the Dokdo islets and nearby Ulleung Island in the East Sea.

Access to the islets was limited to tourists until 2005, when Japan’s Shimane Prefecture held its first “Takeshima Day,” which inflamed tensions with Korea.

North Gyeongsang also celebrates Dokdo Day with the opening of a cultural exhibition for Ahn Yong-bok, a fisherman from Busan who traveled to Japan in 1693 during the Joseon Dynasty (1392-1910) to appeal to the Japanese government to recognize Dokdo and Ulleung Island as Korean territory. On Oct. 8, a memorial center for Ahn was opened on Ulleung Island. The center had previously been under construction for three years and highlights Ahn’s efforts in the 17th century to protect Korean fishing waters.