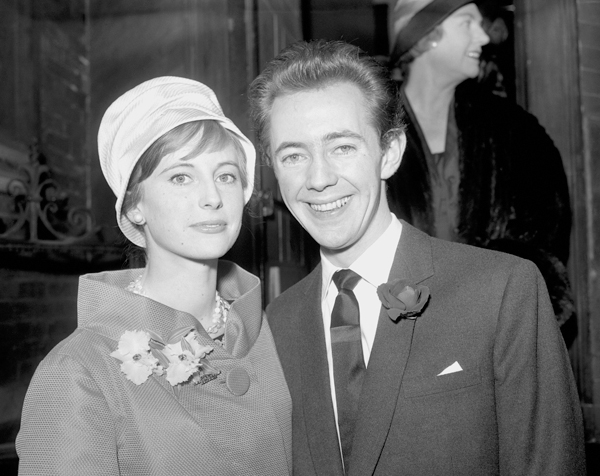 From March 22, 1959, British actor and musician Noel Harrison, and his bride, Sara Tufnell, at the register office after their wedding in London. [AP/NEWSIS]

LONDON - British singer and actor Noel Harrison, known for the Oscar-winning 1960s song “The Windmills of Your Mind”, has died aged 79, his friends and family said on Tuesday.

Harrison was reported to have suffered a heart attack at his home in Devon in southwest England last Saturday after performing at the nearby village of Black Dog.

His co-star in the 1960s spy-fi TV series “The Girl From U.N.C.L.E,” Stefanie Powers, announced his death on Twitter.

“Let us all light a candle to speed him on his way - he deserves to fly with the angels,” she wrote.

Harrison, the son of the six-times-married movie star Rex Harrison, was born in London, raised in Cornwall in southwest England, and lived in Switzerland, the United States and Canada.

He developed a passion for skiing and competed for Britain in the giant slalom in two Olympic games in the 1950s.

In the 1960s he moved to the United States where he had chart hits with “A Young Girl” by Charles Aznavour and “Suzanne” by Leonard Cohen.

“I was part of the ‘British Invasion’ spearheaded by The Beatles. I bought a nice house in Los Angeles,” Harrison wrote on his Web site.

His best known work, “The Windmills of Your Mind,” won the Academy Award for best original song of 1968. It was the theme to the movie “The Thomas Crown Affair.”

“People love that song, and it’s great to have a classic like that on my books,” Harrison said in his final interview with the magazine Devon Life a few weeks before his death.

But Harrison, who married three times and has five children, said he never enjoyed celebrity life and headed to Canada in the 1970s for a life on the land where he quickly became broke.

He moved back to Los Angeles in the 1980s where he was greeted with “great disinterest,” he said, and his second marriage failed. But he stayed, working in construction, performing some live gigs and met his third wife, Lori Chapman, a former fashion stylist. Reuters